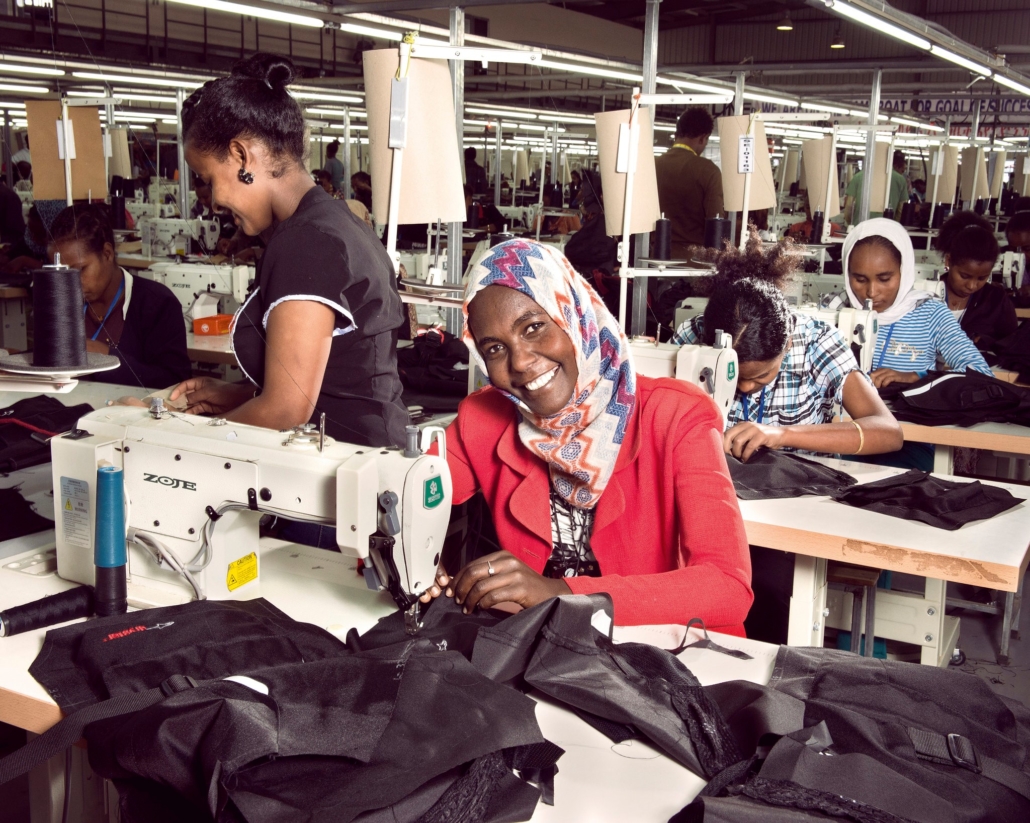 Ethiopia has cultivated a substantial amount of progress in transforming its economy in the last decade due to a sharp focus on government policies and development strategies to advance its budding manufacturing industry. The country is experiencing a thriving working-age population (workers aged 15 to 29) and a large portion of these eager workers are women.

As the country’s priorities shift from agriculture to industry as its most dominant source of employment and profit, the role of women and manufacturing has become fundamental to actualizing Ethiopia’s goal of being a middle-income country by 2025.

About 80-90% of jobs created in manufacturing have gone to women, and as much of a progressive hurdle that is for Ethiopia’s labor force, there is still much work that needs to occur to make the manufacturing industry all-inclusive. Addressing these issues is crucial to achieving sustainable growth and transformation in Ethiopia, and government leaders are beginning to recognize faults and mobilize towards ensuring the representation of women in the workplace.

The Role of Women in an Expanding Industry

On average, around 62% of women have migrated from rural regions to work in the manufacturing industry. With women being the core reason why industrialization in Ethiopia has boosted the economy, there comes a question as to why women are dominating the scene in jobs such as agro-processing, textile and apparel, and leather goods sub-sectors. An improving economy is a relevant reason why women are seeking more work, but another factor is that the majority of women working in the industry have less education, are younger and are working with lower pay than men. This widens the faction of who can work and is a cheaper asset for industries. Companies also tend to prefer women over men because they perceive them as more quality-oriented, dependable, committed, stable and obedient to leadership.

For 89% of women, these industry jobs provide them a steady income for the first time in their lives. A reported 78% said that their income has improved, and 63% stated that their family’s standard of living has also improved since working in the manufacturing industry. As positive as this sounds, there is data that contradicts these points. On average, about 40% of worker’s wages earned goes to housing payments, and data has shown that earnings are barely covering basic living costs.

The Ethiopian Constitution (1995), Labor Proclamation No.377 (2003) and other laws have provided protections to female workers’ equal rights. However, the lack of enforcement of these laws has shown to delay any real progress.

In the manufacturing workplace, women are experiencing discrimination and harassment as well as oppressive risks when traveling to and from work. A United Stated Development Programme (UNDP) report stated that women are only earning 77% of what men make even with proper education and experience. Opportunities to make more in wages have proven to be scarce due to gender-segregation in the Ethiopian industry. This stems from a gross misconception that women are incapable of working high-level positions, resulting in women having a much harder time achieving leadership positions— with 60% of women in the garment production cutting stage, 95% in the sewing stage and only 15% in the finishing stages.

If women do reach managerial or ownership positions, they frequently face restrictions on resources, markets, materials and general information that is critical for a profitable business.

Women and manufacturing in Ethiopia are two dynamic elements that have the potential to generate a level of economic prosperity that Ethiopia has been dreaming of. But in order to fulfill these goals, major improvements need to occur on the ground level as well as the policy level to make labor in the industry more gender-inclusive. The Government of Ethiopia, in cooperation with development partners, has already launched proposals that target the standing issues.

For instance, the Ethiopian Investment Commission (EIC) has worked in partnership with the Department for International Development’s (DFID) Enterprise Partners Programme in establishing and delivering gender relations training packages for women workers and their— often male— managers in the industry. The training for women focuses on reproductive health, personal and menstrual hygiene, nutrition, sexual harassment, communications skills and confidence-building.

The Ministry of Industry (MoI) is also contributing to strategies and objectives for women and manufacturing in Ethiopia by setting up a gender coordination unit at each industrial park, especially at factories with over 1,000 women workers. A 30% minimum quota is also in development for women in leadership and high-skill job employment that focuses on recruitment and promotions with annual rewards to those that perform best.

Visualizing an End to a Misogynistic System

The recognition of a woman’s value in the workplace is emanant, especially the role of women and manufacturing in Ethiopia. Although there is still much that Ethiopia needs to do, the country has already taken big strides in ensuring women receive representation and equal treatment. On a political level, Prime Minister Abiy has appointed more women leaders in government, giving them as equal an opportunity as men. If businesses follow by example, Ethiopia will acquire an economic transformation that could inspire other countries to do the same.