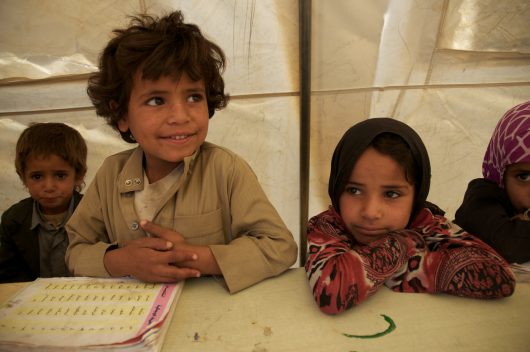 According to UNICEF, malnutrition in Yemen has reached an all-time high.

The organization reports that an estimated 462,000 children in the country suffer from severe malnutrition, an increase of around 200 percent since 2014. Another 2.2 million children are in urgent need of humanitarian assistance to stop any further decline in their health. UNICEF warns that even after the conflict ends, fatal malnutrition may linger and children will continue to suffer from the effects of starvation. Furthermore, at least one child dies in the country every ten minutes from malnutrition, diarrhea or respiratory tract infections.

Malnutrition in Yemen has become a major cause of death for children under the age of 5. The region has seen many children suffer from stunting, a condition where the child is short for their age and that is a symptom of chronic malnutrition. The region that has suffered the heaviest bombing, Saada Governorate, has the world’s highest stunting rates for children, reaching eight out of ten children in certain areas. The condition is indicative of severe mental and physical decline and is irreversible.

More than 900 children were killed in the first year of the war in Yemen alone, making up a third of all civilian deaths. UNICEF reports that thousands more suffer as a result of the conflict. The number of children out of school in Yemen was high even before the conflict, and that number has expanded to two million as schools have closed due to the war. “The state of health of children in the Middle East’s poorest country has never been as catastrophic as it is today,” says Meritxell Relano, UNICEF’s acting representative in Yemen, reporting to Al Jazeera.

Yemen ranks 154th in the world for human development. The displacement of 3.2 million people and limited fuel and food imports have created a severe humanitarian crisis. According to UNICEF, four out of five Yemenis are in need of humanitarian aid.

In addition to malnutrition in Yemen, lack of infrastructure has furthered the country’s health crisis. Water and sewage systems have been damaged during the conflict, and a lack of fuel imports have made it impossible to deliver water to civilians in desperate need. The same lack of fuel has made hospitals unable to power generators in the midst of this severe health crisis.

The conflict in Yemen began in 2014 when troops loyal to the country’s former president, Ali Abdullah Saleh, combined forces with a group known as the Houthi movement and attempted to take back the country from the internationally recognized president, Abdrabbuh Mansour Hadi. Since the Houthi and their allies have taken much of the country, a coalition of countries that are supported by western powers (including the United States) has undertaken an air campaign against the rebels. Since the air campaign began in March 2015, over 10,000 people have been killed and millions have been forced out of their homes.

While the Houthi and their allies have committed serious human rights abuses, the majority of the deaths in this conflict have been attributed to air strikes. The two deadliest incidences in the war so far were an attack on a market that killed 97 civilians in March and an attack on a funeral hall in October that resulted in over 100 deaths. According to Human Rights Watch, the United States is complicit in both of these attacks by providing the deadly weapons that were used to bomb civilians.

Human Rights Watch further urges the United States to permanently ban the sale of munitions to Saudi Arabia, as the bombs sold by the U.S. to this country have been found at the sites of 23 illegal airstrikes. In addition, the international community must do more to address the severe crisis of malnutrition in Yemen.