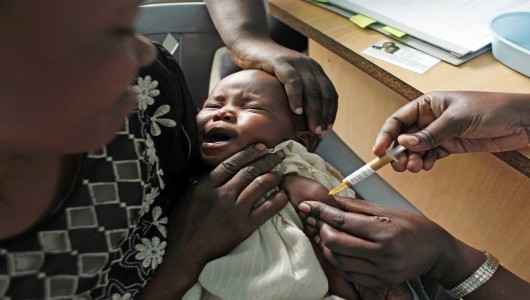 Thanks to the efforts of GlaxoSmithKline and the generous support of The Bill and Melinda Gates Foundation, the world’s first malaria vaccine has been approved by regulators at the European Medicine Agency. The drug is called Mosquirix, and although it is likely not the end-all solution to the widespread disease, it is a stepping stone in the right direction.

GSK worked with the PATH Malaria Vaccine Initiative to create the immunization, which is meant for use in tropical and subtropical areas where the illness is prevalent and largely uncontrolled. Called RTS,S in its experimental stages, Mosquirix is designed for children 6-17 months old whose immune systems are still developing.

Mosquirix works to prevent malaria by attacking Plasmodium falciparum parasites. These parasites multiply in the livers of people affected by malaria and head into the bloodstream where they cause more severe symptoms. This approach to preventing malaria is different than those of other vaccines, which seek to take down viruses and bacteria.

The Bill and Melinda Gates Foundation contributed over $200 million to the drug’s research and development, and GSK is optimistic that it will be effective in reducing incidences of malaria in Sub-Saharan Africa where cases of malaria caused by the parasite are most common. Of the nearly 600,000 deaths related to malaria in 2013, 90 percent of these occurred in Sub-Saharan Africa; 83 percent in children under the age of five in the same region.

Studies show that Mosquirix reduces malaria cases by only a third and that its protection decreases in the long term. However, experts agree that some results are better than no results. In conjunction with other protective measures like insecticide-treated bed-nets, Mosquirix may become an important part of the malaria fight.

The main road bump for Mosquirix? Distribution. The vaccine may exist, but to the young children in Africa who need it, it may as well be a fantasy.

The question is whether the distribution of the vaccination to areas where it is needed is worth the time and the money. The World Health Organization is skeptical of the feasibility of Mosquirix’s implementation and has not yet issued a recommendation for its use. Officials at the WHO are worried that financing for the vaccine may “draw away from scaling up bed nets, effective drugs and rapid diagnostic tests for malaria.”

There is a reason that most vaccines are not made against parasites – unlike bacteria or a virus, a parasite has a complicated life cycle that transports it around the body. Parasites like those that cause malaria can remain living in the body for years.

However, the news that it is possible for a malaria vaccine to be developed and approved is promising. Whether or not Mosquirix achieves outstanding success, discussion surrounding it is undoubtedly paving the way for future malaria-related drug research.