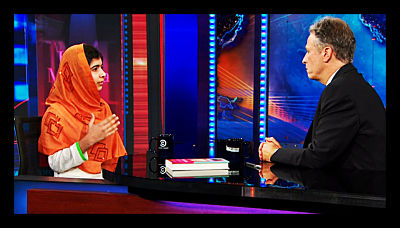 With a comprehension of human nature typically not seen in someone of only 16 years of age, Malala Yousafzai explained the motivation for literally risking her life for everyone’s right to education by saying: “We are human beings…we don’t learn the importance of anything until it’s snatched from our hands.”

In an interview with Jon Stewart of Comedy Central’s The Daily Show, well-known educational activist Malala Yousafzai once again stunned the world through the embodiment of such pure compassion and altruism that left her usually quick-witted host speechless.

She described her home of Swat Valley, located in Pakistan, as a peaceful paradise of natural beauty with flowing rivers and lush green hills. It was not until 2007 that the Taliban in her hometown had begun attacking schools and anyone they deemed anti-Taliban. Malala recounted how she realized how crucial education was after recognizing the Taliban feared the power of an educated woman.

The empowerment and liberation these young girls felt in school was too great for their community to surrender to the Taliban. Schools went underground, removed school signs and tried to continue educating children even under the possibility of being attacked by the Taliban.

When asked what motivated her to stand up for education, she spoke of the inspiration her father gave her who was also an activist for women’s rights and education. His example gave her the courage to take the fight for her rights into her own hands rather than wait for the government to intervene.

By raising her voice on multiple platforms from her blog with BBC Urdu, to appearing on media channels, Malala generated enough awareness of Swat Valley’s situation and advocacy for women’s education, that the Taliban labeled this 14-year-old girl as a threat. She explained that the Taliban attempted to rule Swat Valley through fear and the misuse of Islam. Malala refused to back down and instead used her intelligence to articulate her experience and subvert the Taliban’s tyranny, but in turn risked her life.

After a friend told her that the Taliban were targeting her, she described what she planned to do if a member of the Taliban was about to kill her. With her steel resolve, she stated to Jon Stewart and everyone around the world watching that she would never retaliate against the Taliban, because doing so would make her no different than a terrorist.

Dialogue and compassion would be her weapons of choice, and she would tell the Taliban she fights not for her education, but for the education of all – including the Taliban’s children. Such blunt advocacy for peace and pacifism momentarily left Jon Stewart in silence until he comically asked if Malala’s father would be mad if he adopted her.

Other great leaders in history have came to similar conclusions when faced with the idea of violent suppression. Martin Luther King Jr., Mahatma Gandhi, Mother Theresa, and now Malala Yousafzai have displayed a similar capacity for compassion and peace that great change often necessitates.

It requires a certain level of vision and passion to make people gravitate towards the leaders of grand social movements and it is evident in the actions and resolve of Malala Yousafzai that she poses such qualities. It is now up to the people across the world to pick up their pens and raise their voices as Malala has done and join the fight for equality she has risked her life for.