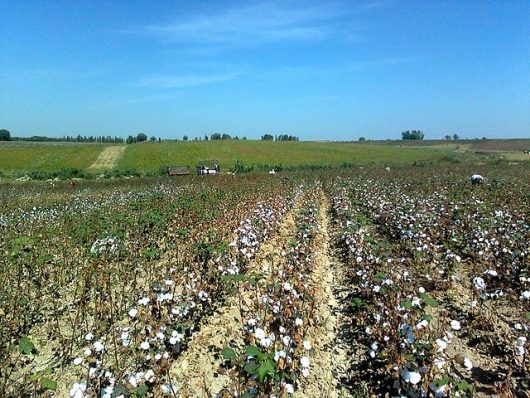 In Central Asia lies the Republic of Uzbekistan, a country just north of Turkmenistan and south of Kazakhstan. With a physical size only slightly larger than California, Uzbekistan’s population is just lower than 29.5 million. Although a sovereign nation today, Uzbekistan only just gained independence from the Soviet Union in 1991. Today, the nation’s economy remains largely state-run with little diversification. As of 2015, around 12.8 percent of individuals living in the country were below the poverty line. Roughly 75 percent of these individuals lived in rural areas. Here is one of the major causes of poverty in Uzbekistan:

“White gold,” also known as cotton, currently accounts for a whopping 60 percent of Uzbekistan’s export earnings. This resulted from the actions of the Soviet government during the 1940s. Because cotton is a highly water intensive crop, the Soviet Union built canals to divert water from the Aral Sea to Uzbekistan’s cotton fields. Now, the Aral Sea has shrunk to 15 percent of its original volume and former ports around the Aral Sea rest as ghost towns. The loss of these ports has been another cause of poverty in Uzbekistan.

This has also meant that Uzbekistan’s economy remains undiversified. As the current government of Uzbekistan retains tight controls on most facets of the economy, farmers are pressured to meet cotton quotas, and other farmers can grow little else. This has compromised the country’s food supply.

What makes matters worse is that governmental corruption drains farmers’ deserved income from yielding cotton. A U.K. charity called The Environmental Justice Foundation has stated, “the official price that farmers receive in return for their cotton represents just one third of its true value. But the real outlook is far more bleak. Farmers have reported that they don’t even receive the official procurement price.”

Therefore, the conquest for “white gold” or cotton has been one of the major causes of poverty in Uzbekistan. If dreams for a more thriving economy are to be realized, the economy must expand to include more than cotton.