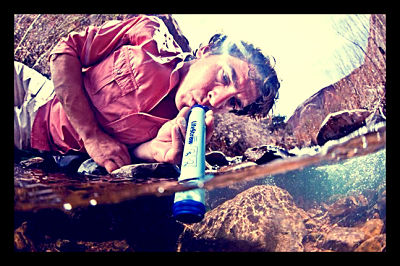 900 million people in the world are without access to safe drinking water. This a serious problem which the world is trying to address in the Millennium Development Goals (MDGs). A product developed by the Swiss-based company Vestergaard Frandsen is making great progress towards water sanitation. The product is called LifeStraw. It is a 25 cm straw that purifies water by simply sucking on the product, like a straw. LifeStraw uses no chemicals when it purifies water.

LifeStraw uses the point-of-use (POU) approach to bring about effective, and affordable drinking water. The philosophy of POU is that purification of drinking water at the point of consumption is much more cost-effective and disease preventative. By purifying water in the household it reduces the risk of water being contaminated at other points during the purification process. POU empowers people to control the quality of their own drinking water. In the developed world, household water-quality interventions can reduce diarrhea morbidity by more than 40%.

The LifeStraw currently costs $20 in the US, but it is subsidized and made cheaper for those in need. LifeStraw was distributed to those in need during the 2010 Haiti earthquake, the 2010 Pakistan floods, and the 2011 Thailand floods. LifeStraw won the “Best Invention of 2005 Award” by Time Magazine and the 2008 Saatchi and Saatchi Award for “World Changing Ideas.”