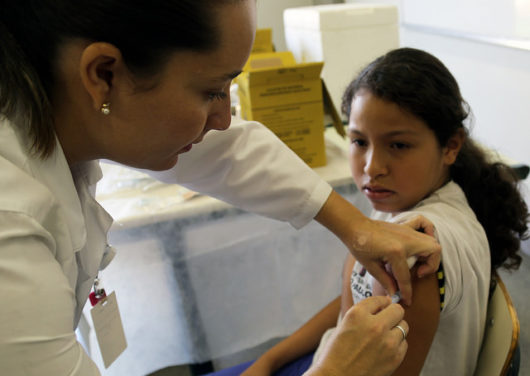 From 1940 to 2016, the life expectancy in Brazil had steadily risen to an all-time high of 75 years. This improvement was largely due to efforts by the Ministry of Health and Ministry of Environment to strengthen the health and sanitation systems in the country. A continued increase in life expectancy can be achieved by utilizing technology to enhance the capabilities and performance of the healthcare system and by improving sanitation and access to clean water for all Brazilians.

In 1988, after the end of Brazil’s military dictatorship, a newly established constitution created the Unified National Health System (UHS), which was expanded to provide free of charge and comprehensive health services with near-universal access. A focus on prenatal care, child nutrition programs, immunization campaigns and other important preventative services have played key roles in the increase of the life expectancy in Brazil.

In 1994, the Family Health Strategy (FHS) was founded. It has been heavily relying on community health workers (CHWs) to provide basic and preventative healthcare. Teams of doctors, nurses and community health workers were deployed throughout the country to cover territories of 3,000 to 4,000 residents. The FHS provides medical resources to underserved areas and allows the health teams to closely monitor the health status of the residents in their region. Currently, there are more than 265,00 active CHWs delivering care to around 67 percent of the population. The FHS was instrumental in increasing the life expectancy in Brazil from 67 years in 1994 to 75 years as of 2016.

The Use of Technology

Although the UHS is vital to improving health and life expectancy, the system still faces challenges caused by rising healthcare and medicine costs, maldistribution of medical professionals and poor access to health services in low-income regions. The Ministry of Health has invested in health technology systems and mobile applications to expand access to health services, improve the quality of care and reduce the overall costs of the UHS.

In 2012, they partnered with the medical journal, BMJ, to create the BMJ Best Practices application. More than 11,400 people now use the mobile app to make more informed diagnostic and treatment decisions for their patients at the point of care. Early diagnosis and treatment help to improve health outcomes, so it is beneficial for Brazil to continue to embrace this kind of technology. It is estimated that the country would spend $336 million on healthcare technology and applications by the end of 2018, but would potentially save $42 billion per year over the next 15 years. Hospitals and clinics with integrated health technology, such as electronic health and medical records, have also been shown to have a 3 to 4 percent lower mortality rate, which improves life expectancy rates in Brazil.

It is estimated that 50 percent of Brazilians do not have access to sewage and sanitation services. In fact, 35 million Brazilians still lack access to clean water. Inequalities exist in the over-concentration of services throughout affluent regions while services are lacking in poor and low-income regions. Between 2010 and 2014, there were almost 14,000 hospitalizations for diseases related to poor sanitation. In the densely populated Porto Alegre region, dengue rates were five times higher from 2001 to 2013.

In order to address the burden of sanitation-related illnesses, the National Public Sanitation Plan was formed in 2007 with the goal of providing clean water and sewage services to 93 percent of households by 2033. Between 2007 and 2015, the percentage of households with access to clean water had only slightly increased from 80.9 to 83.3. Operating with a deficit of $1.9 billion has impeded progress, and the program is currently on pace to meet its goals by 2050. With proper funding, however, the country could meet its original goals, which would go a long way to increase the life expectancy in Brazil.

Substantial investment from the federal government, public-private sources of capital along with investment from foreign aid programs such as UNICEF is still needed if Brazil is going to establish the infrastructure to achieve its original goal by the target deadline of 2033. As the country looks to the future, expanding the FHS, integrating technology into the healthcare system and enhancing sanitation services are key focus areas. These priorities will sustain and further improve the life expectancy in Brazil.

Changes in Transcontinental Trade in Africa “Reflect”: A New Kind of Clothing Approach
Scroll to top