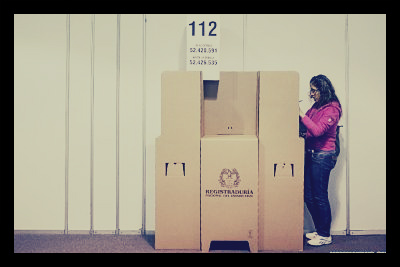 Congressional elections in Colombia took place on March 9th. President Juan Manuel Santos, who is currently in peace process negotiations with the FARC guerilla group that has been terrorizing the country for fifty years, has narrowly kept his National Unity coalition majority in the lower and upper houses of Congress.

Many view the elections as a referendum on Santos’ negotiations with the FARC rebel group. The Santos administration has gained ground in recent negotiations with draft agreements already set for rural development and political participation for minority parties.

The elections also propelled former President and political rival of Santos, Alvaro Uribe, into the Senate. Santos had served under Uribe as Defense Minister until he won the presidency, and has since reversed many of the policies Uribe had fought for, including restarting the peace process. Uribe opposes government negotiations with the FARC rebel group, and his win in the Colombian Senate signals a fracture in public opinion on this contentious issue.

Important to note is the high rate of voter abstention during the elections. Out of the 32,835,856 Colombians eligible to vote, only 58.11% actually voted. Further, out of the votes cast, 6.2% of votes for the Senate and 6.6% of the House votes cast the blank ballot option. Unmarked ballots drew 5.85% of the votes in the Senate and 3.4% in the House.