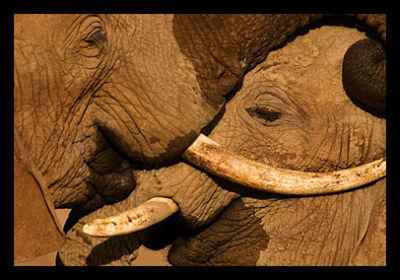 Poaching elephants is a practice in which people kill elephants in order to sell their tusks, meat, or hide. Poachers tend to target old matriarchs, or the oldest adult females, which is especially problematic for the elephant herds because the adult females are responsible for holding the herd together. In many cases, the structure of the herd was additionally disrupted as many young elephants died alongside their mothers.

Elephants are also known to grieve much as humans do. They visit the carcasses of their dead mates, families, or herd members and are emotionally affected by the loss. Should African elephants be completely killed off, there would be no way to repopulate, which would irreversibly damage the ecosystems of Africa and the environment as a whole. Such a disruption in the environment could affect the societies living near herds of African elephants, and potentially negatively affect Africa’s population and economy.

Unfortunately, elephant poaching still occurs in Africa as of 2013, and one of the people who have been partaking in the act is the well-publicized Joseph Kony. Kony, along with the Lord’s Resistance Army, or the LRA, has been elephant poaching in order to keep itself going. This is rather surprising, but most of all, it reflects the negative energy of the LRA as a whole. Kony and his army are using one atrocity to help fuel further atrocities. Kony is wanted for international crimes due to his crimes against humanity and children, and his war crimes. The Enough Project, along with the Satellite Sentinel Project, has documented evidence that the LRA has been poaching elephants. Kony has asked his army to give him elephant tusks to sell in order to buy food, weapons, and any other number of supplies.

This poaching has led to the support of Kony and the LRA, which is just one more reason that elephant poaching should be stopped. Throughout this elephant poaching, the LRA has also fought with the Garamba park rangers using weapons and has outmaneuvered the rangers using GPS and satellite technology. Unfortunately, the current rates of elephant poaching mean that more elephants are being killed than are reproducing. The U.N. has given an estimate that the African elephant population has declined by at least 50% but possibly up to 90% percent, which is a detrimental loss of an already endangered species. The LRA is poaching elephants and it allows them to continue to spread violence in the region and to continue to evade the international community.

There is not all bad news, though; the LRA can still be stopped. The way to do this is by supporting the Garamba park rangers, in order to give them better equipment to find and fight the LRA. An example of this support was through the Economic Community of Central African States (ECCAS), which has launched an initiative worth over $2 million to combat elephant poaching. If the international community focuses on ending elephant poaching, it could also end Kony’s dangerous reign.