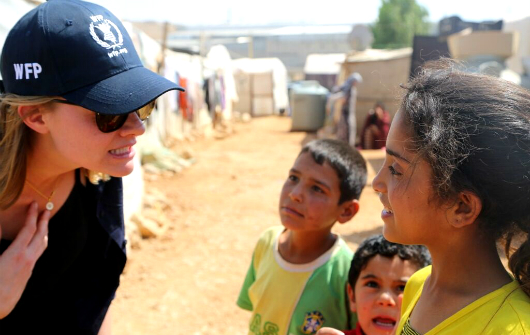 Jessica Watson would like to see children around the world pursue their dreams. In order for that to happen, she must first tackle world hunger.

The 22-year-old is a Youth Ambassador for the United Nations World Food Programme (WFP). Hailing from Queensland, Australia and awarded Young Australian of the Year in 2011, Watson is the youngest person to ever sail around the world solo and unassisted, having completed the global voyage when she was 16 years old.

Watson’s most recent expedition, however, brought her to Lebanon and Jordan, where she visited Syrian refugees. Her “Sail with WFP” initiative recognizes the intimidating journey made by young Syrians who have left their homes for Lebanon or Jordan. As WFP’s Youth Ambassador, Watson provided food and support for suffering families.

Founded in 1961, WFP is the largest hunger-fighting organization in the world, supplying food in times of emergency and working with communities to create sustainability. The goal of the organization is to end world hunger and eliminate global poverty. Funded by governments, companies and private individuals, WFP provides annual assistance to more than 80 million people in 75 countries.

In Lebanon, Watson sailed with five Syrian and Lebanese youths from Beirut, Lebanon’s capital, to a northern port. In Jordan, she spent time in the Azraq refugee camp. There, Watson met a single Syrian mother Manal and her eight children. She accompanied the family to the camp’s only grocery store, where refugees buy food with electronic food cards from WFP.

Earlier this year, however, WFP had to reduce refugee stipends due to a lack of funding. As a result, the refugee program is 81 percent underfunded and many Syrian families are struggling to stay alive. The organization requires $138 million to continue helping refugees in Jordan, Lebanon, Egypt, Turkey and Iraq through September.

Watson also visited a Save the Children International youth center in Amman, Jordan’s capital, and hopes her journey will bring attention to the hardships faced by the Syrian people. A WFP Youth Ambassador since her young global voyage, Watson sails towards a new, hunger-free future.