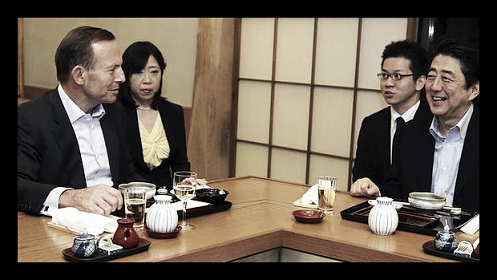 Negotiations for a trade such as this has been in the works for seven years, though only now are the extensive efforts coming to fruition. Concluding with a deal on April 7, Japan and Australia finally reached an accord on a free trade agreement between the two countries.

Prime Minister Shinzo Abe of Japan and Australian Prime Minister Tony Abbott express mutual respect for one another, citing security and neoliberal economic agendas as important ties that have connected the two men and their respective nations for some time. A Joint Declaration on Security Cooperation, renewed in 2010, was initially signed between Japan and Australia in 2007 as a formal recognition of their devotion to the defense and support of one another. The Declaration came after years of informal cooperation, in such contexts as United Nations peacekeeping operations in the 1990s. More recently, Abbott has praised Japan’s democratic values and presence in international security activity.

Japan’s agriculture lobby, however, expressed concerns of an internationally aggressive competition and was opposed to easing access to food imports. Though Abe clearly favored opening Japan’s economy to increased competition, Australia was understandably concerned that the rigorous final round of negotiations would fall through as a result of the Japanese lobbying group’s hold on the ruling party that it elected. Yet the signed agreement builds on a trade treaty of 1957 that contributed heavily to the positive sentiment between the two nations. The new free trade agreement, then, is expected to build on the great business and cultural relations, and is consequently considered by many trade officials to be the best deal the Japanese economy has ever granted to another country.

The final version of the free trade agreement calls for joint compromise in both economies. While Japan is now required to phase out its current 38.5 percent tariff on Australian beef exports, Japan will end tariffs on Japanese vehicles, electronics and household appliances. Within 15 years, the Japanese beef tariff is expected to reach only 23.5 percent, with a subsequent decrease to 19.5 percent in 18 years. The Australian Trade Ministry also reported that Japan would increase cheese imports and simultaneously phase out tariffs on fruits, honey, vegetables, nuts and wine. Prime Minister Abbot has thus declared that Japan is “Australia’s best friend in Asia.”

Some argue that the free trade agreement between Australia and Japan, in bringing both nations closer to the United States as a result, could risk a free trade agreement with China, Australia’s number one trade partner. However, Japan is Australia’s number two partner, and the political and security ties could make a difference in the long run. After seven years of intense negotiations, one can only hope that Australia and Japan have made the correct decision.

Anthropologists Aid in the Ebola EpidemicWomen in Rwanda
Scroll to top