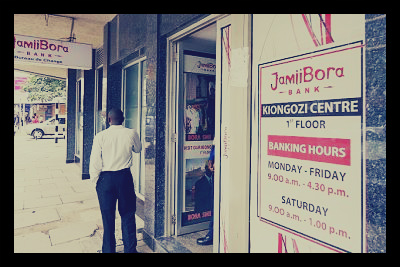 Beginning as a charitable trust, the organization currently specializes in micro finance services for an estimated 300,000 Kenyans with 150,000 new customers acquired in 2013 alone. JBB is not simply a bank; the institution has become an established resource in fighting Kenya’s poverty level over the last decade. The poverty gap around the world has grown dramatically worldwide and Kenya is no exception.

In the past 2 years, JBB has raised its capital by over 1 billion Kenyan shillings and shifted the focus on poverty aid. Initiatives include affordable housing, vast infrastructure improvement, and increased employment. Available banking methods have evolved to provide individuals with the financial tools necessary to gain middle income living through personal, mortgage, small and medium enterprise and agricultural banking.

Bank members are allowed to borrow over twice the amount of funds within their saving accounts which can then be applied to a variety of debts including school bills, healthcare costs, housing payments, and business startups.

Technology has played an important role in the bank’s growth within the last year. Newly implemented programs suggest that lack of access to technology directly correlates to poverty levels, as well. In response, the first ATM debit cards were released to customers by JBB earlier this year. Mobile banking has also become available within the last few months and the addition of Western Union services have enabled Kenyans to connect to the outside world with ease.

The institution has designed an innovative reward program for its citizens. Similar to referral programs favored by U.S. banks, employees, and customers are financially rewarded for successfully referring a friend to enroll in banking services. However, JBB offers rewards for the duration of the new account. In theory, if Customer A convinces Customer B to enroll in services, and Customer B maintains an account for 10 years, Customer A will receive monetary rewards for 10 years.

Jamii Bora also contains a component solely devoted to public health with special focus on issues such as HIV/AIDS, maternal health, child and newborn wellness, and primary/secondary care. Health insurance is available to members and includes maternal care, HIV/AIDS patient inclusion, and inpatient care without any form of co-payment.

The plan is needed in a country where nearly 34,000 children die from malaria annually and an estimated 360,000 are prescribed antiretroviral medications for HIV/AIDS treatment, according to USAID.

The bank continues to strive to reach its goal of 6 million members by 2018. It hopes to expand its current network across the continent, essentially allowing many developing African nations to gain a foothold in the current technology-centric world. Its innovative programs may one day allow millions of Kenyans and their neighbors to escape their current state of poverty.