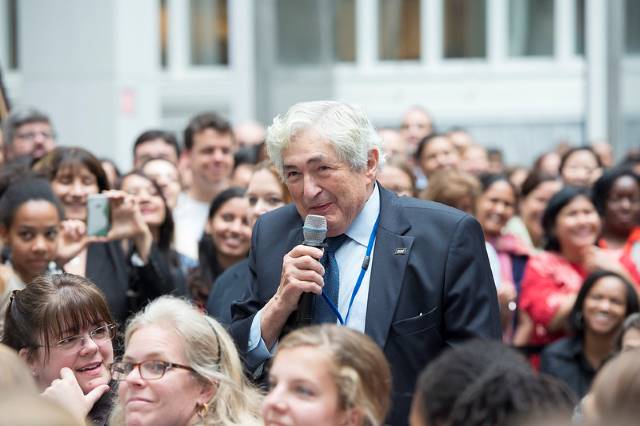 James Wolfensohn, the ninth World Bank president, passed away at the age of 86 on November 25, 2020. During his decade of leadership, the World Bank became a preeminent leader in addressing global poverty as one of the world’s largest financiers of education, health, HIV/AIDS programs and the environment. His legacy as a champion of poverty reduction is worth remembering and is one that future leaders should emulate.

Growing up in Edgecliff, New South Wales, Wolfensohn’s father struggled financially. According to his autobiography, “A Global Life,” the financial insecurity that challenged his family through his childhood had a profound impact on his life and was something he would carry with him through his tenure as president of the World Bank.

After graduating from the University of Sydney with an LLB Law degree and later earning an MBA at Harvard Business School, Wolfensohn worked for multiple firms and investment banks. He eventually created his own investment firm in New York in 1981.

When Wolfensohn first came onboard at the World Bank, the Bank was under intense scrutiny. Facing mass protests, a number of failed projects as well as increasing criticism from the investment banking industry and NGOs, many felt the World Bank had lost sight of its mission and objectives.

When Wolfensohn received the appointment of the ninth World Bank president in 1995, the world was facing the aftermath of the collapse of the Soviet Union, an intensifying war in the Balkans and around 31% of the world’s population was living at or below $1.90 per day.

Facing a complex set of challenges as World Bank president, Wolfensohn rose to the challenge and began implementing new initiatives and started retooling projects. Under his leadership, the Bank took steps to refocus on social-sector lending programs instead of the ineffective and expensive infrastructure initiatives of the past. Simply put, he reinstated the World Bank’s central goal: helping the world’s most impoverished nations defeat poverty.

Wolfensohn’s policy regarding the debt that many African and South American countries incurred best exemplifies this shift in organizational focus. It is the Debt Initiative for Heavily Indebted Poor Countries (HIPC), a framework for all creditors to provide debt relief to the most heavily indebted low-income countries. The goal of the initiative was to address halted economic growth and slowed poverty reduction due to debt accumulation.

Further policies aimed at reducing poverty included the Comprehensive Development Framework (CDF) and the 1999 Poverty Reduction Strategy. The CDF provided a strategy and vehicle for the Bank to implement the U.N. Millennium Development Goals (MDG). The World Bank committed to achieving the goals, placing the MDGs at the center of its poverty reduction efforts.

Wolfensohn also committed to increasing engagement with disenfranchised communities such as impoverished youth, the Roma and those with disabilities. He also took steps to help make HIV/AIDS treatment affordable.