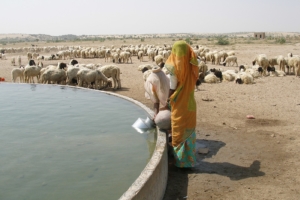 According to UNICEF, in 2017, less than half of India’s people had “access to safely managed drinking water.” Furthermore,  contamination of water is a serious issue and two-thirds of all Indian districts endure “extreme water depletion,” so many of India’s citizens cannot access water or have to trek long distances to access it. This national issue disproportionately affects women and children as they are the ones typically responsible for gathering and transporting water. However, since August 2019, the Jal Jeevan Mission (JJM), run by the Department of Drinking Water & Sanitation in the Ministry of Jal Shakti, has aimed to provide all houses in rural India with functioning tap water by 2024.

According to Forbes, every year, about 37.7 million people in India suffer waterborne diseases due to unsafe water and 1.5 million Indian children lose their lives due to diarrhea arising from contaminated water. Water sources contaminated with fluoride, arsenic and other chemicals negatively impact the health of Indian people. Annually, India loses 73 million days of labor due to waterborne illnesses. Altogether, India faces an economic burden of $600 million per year as a result of the associated costs of waterborne diseases. A National Geographic article published in 2020 said that 21% of India’s communicable illnesses were due to unclean water.

The lack of water also causes other issues in Indian society. Women and children are often responsible for going on long treks for water if there is no available source of water near their communities. Many children are unable to attend school and women cannot participate in education or paid employment because they must retrieve water for their families.

Because of these conditions, the JJM is working to ensure all rural houses in India have functioning tap water by 2024.

How the Jal Jeevan Mission is Making a Difference

Prime Minister Narendra Modi launched the Jal Javeen Mission in 2019. Its mission is to provide safe and accessible drinking water by allowing families to access water from their own homes through household tap connections. It works with the states in India to ensure water security and accessibility are available for all citizens. Since the launch of the mission, by September 1, 2022, JJM provided 43.18% of India’s rural households with tap connections. As of September 2022, 52% of the nation’s rural houses have access to functional tap connections.

Not only does the JJM work to provide rural houses in India with tap connections but it also aims to ensure schools have access to convenient clean water. By June 2022, JJM had assisted 860,000 schools and 890,000 daycare centers with access to a clean and safe water supply.

More women are actively involved in community issues about water. As many as 1 million women have received training from JJM to ensure safe water quality water through the use of field safety kits. Additionally, women comprise 50% of the members of 496,000 established Village Water and Sanitation Committees. Women are now playing a key role in discussions and decisions pertaining to clean water access in communities.

Ultimately, the Jal Jeevan Mission has allowed more rural households in India access to safe and clean water. This will bring about better health in communities as waterborne diseases become less prevalent. More children can attend schools and women no longer have to endure the burden of walking long distances to fetch clean water. All of this is thanks to the Jal Jeevan Mission and its goal to provide all rural houses in India with functioning tap water by 2024.

Renewable Energy in JapanExamining Poverty in Argentina
Scroll to top