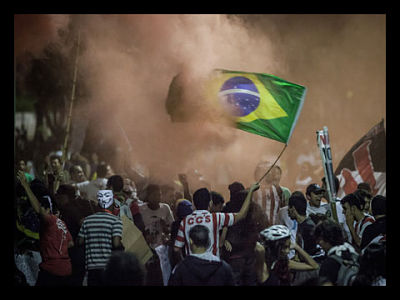 Income inequality is at the heart of the protests currently raging across several Brazilian cities. Originally, the protests were about the twenty-cent price hike for bus fare. Eventually, however, they turned into protests about everything that’s wrong in Brazil.

Next year’s World Cup has added to the public dissent. Brazil’s rampant political corruption has resulted in huge expenditures. The government has spent twice the amount as Germany and South Africa spent on the World Cup.

It is predicted that FIFA will make over one billion dollars from the tournament, but Brazil will benefit very little. Originally, it was presumed that the Cup would be paid for by private investors and corporations, and that the public funds would go toward bettering the existing infrastructure. But then the Brazilian government lent money to build brand-new stadiums. Essentially, the government is spending billions of dollars on a private event that is so expensive that only the rich can attend.

It has become a bit of a paradox — a country that is a symbol of soccer to many has turned against the sport’s largest event. The huge public expenditure has left the people wondering: why can the country invest millions on a soccer tournament but can’t seem to find funds to fix the broken healthcare and education systems?

The independent protestors have balked at any specific political party that has tried to claim leadership in the demonstrations, preferring instead to remain a party-free dissident entity. Even the large Workers Party was shooed away.

The impact of the country-wide protests have already been felt. President Dilma Roussef went on TV and invited protestors into the head of the government to talk about what’s going on. She met with the Movimento Passe Livre, the university free fare group that started the protests, and ultimately ceded the twenty cent transport fare increase.

While the positive impacts have been felt, it is doubtful that any more progress will be made on the issue. With so little political cohesiveness within the demonstrators themselves, it appears that the dissidence will continue into the foreseeable future.