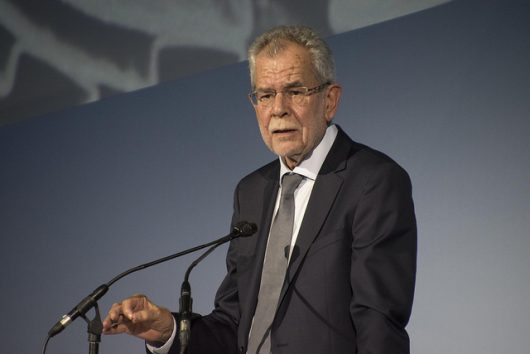 70 years ago, President Harry Truman’s Secretary of State, George C. Marshall, gave a speech to announce the Marshall Plan, an initiative giving $13 billion in foreign aid to help rebuild Western European economies after World War II. The administration knew it would be a heavy lift, convincing Americans to accept the probability of higher taxes in place of tax cuts they had been promised. Now, it is just as important for leaders to make their case for foreign aid and investment in new markets to the American people, highlighting the twin benefits of security and sustainability for all parties involved.

So how did Secretary Marshall sell his plan?

“Your Eighty Dollars” is one of many short videos designed to explain how the funds spent on the plan, equaling $80 per American taxpayer, would bring positive returns to taxpayers themselves. Marshall had the political savvy to appeal to the self-interest of his countrymen, recognizing that a nation weary from the costs of war would not automatically be eager to shell out more money. The administration also understood the value in emphasizing the relatively small sum—$80—each individual taxpayer would be paying, rather than the much larger $13 billion ($132 billion in 2017 dollars) the United States would spend in total.

The video emphasizes the United States’ myriad strategic advantages in helping rebuild Europe as well as the dire consequences of failing to do so. It asserts the debt of cultural heritage the U.S. owed to Europe, the benefit of having allies in the most populated and pivotal theatre when it came to waging war and the danger of debtor democracies in the West becoming easy prey for dictators and demagogues, both foreign and home-grown.

“Your Eighty Dollars” succeeded in part because it showcased results, not just fuzzy goals, far off in the distance. The narrator introduces the video’s purpose as “presenting documentary evidence of the progress the free world is making toward strength through mutual security,” and evidence of what U.S. dollars had already accomplished would prove to be a powerful motivator.

The video included scenes of the United States helping clear Sardinia, an Italian island in the Mediterranean Sea, of malaria so its fields could be ready for farming. Other scenes which showed Europeans rebuilding and improving their factories with U.S. assistance and techniques, helped make the humanitarian and economic case.

More importantly for Europe, the plan encouraged European governments and privately-held companies to invest more. Research by De Long and Eichengreen shows that countries receiving aid under the Marshall Plan saw more national investment and grew far faster than other wealthy economies (e.g., Argentina) that benefitted from the new post-war economic order under Bretton Woods but did not receive aid. Those examples of powerhouse growth became even more reliable markets for American products—as well as American allies. These countries avoided the fate of much of Europe after the First World War: plagued by crushing debt without relief and, thus, vulnerable to voices of prejudice and division.

Global Poverty and the Road Ahead

In the quest for security and sustainability in the developing world, many themes from post-World War II repeat themselves. As was true in the 1940s and 50s, other world powers—some of which do not share the U.S.’ values of freedom, democracy and open markets—are looking to assert their influence and control over poverty-stricken countries in the developing world.