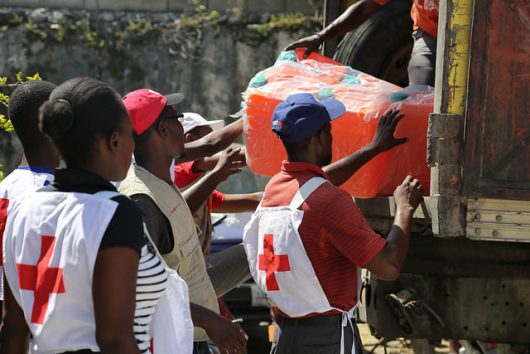 Hurricane season: a three-month span between the months of June and November when people from Panama to Maine brace for destructive and often deadly wind and rain. These large storms, often the size of small countries, can bring winds from 74 mph at their weakest to well over 100 mph at their strongest, dumping large quantities of rain as they move across land and sea. The warm waters of the mid-Atlantic and Caribbean help feed these spinning storms, which can lumber along at 30 to 70 mph. Due to their immense size, the amount of precipitation often causes flooding in areas along a hurricane’s path. Combine this with high winds, and areas often hit by powerful hurricanes regularly need international hurricane relief.

Hurricanes begin their life in the mid-Atlantic, either off the coast of Western Africa or over the middle of the ocean. From there they move in swinging arcs and paths that are difficult to predict for the coast of Central America, the Caribbean islands, the Southern United States and the Eastern Seaboard. Since these storms hit so many countries and often leave devastation in their wake, state-sponsored organizations, NGOs and privately-funded charities offer international hurricane relief. Many of these charities also operate in the South Pacific and the Indian Ocean. Following are examples of organizations that provide international hurricane relief.

The United States Agency for International Development is the main arm of the United States effort to aid its neighbors and other nations around the world. USAID provides both long-term aid programs and disaster relief programs, and International Hurricane aid provided by USAID reflects this. Programs already operating in nations in the hurricane danger zone are provided with funding and technical assistance to help people when disaster strikes. Being prepared beforehand can help to save many lives. USAID also utilizes their Disaster Assistance Response Teams, or DART’s. During the 2017 hurricane season, DART teams provided aid and organization to 11 locations in six different countries. Through USAID, the United States provided nearly $23 million in aid. Everything from chainsaws to desalination units was flown in on 55 air missions which delivered 155 metric tons of supplies. Approximately 83,000 people were helped by this DART mission.

While many hurricanes strike impoverished or underprepared countries, they also strike the United States. When they hit the United States, the large storms do not discriminate. Wealthy and poorer areas alike are usually struck, and it is only after the hurricane that money matters. This was evidenced during Hurricane Katrina.

The American Red Cross society not only prepares and responds to the worst in the United States; they also provide international hurricane relief to other countries hit by the severe storms. The American Red Cross emphasizes preparedness. A main focus of the organization is to pre-position supplies so they can be easily accessed during and after a storm.

On the American Red Cross’ website, useful advice for preparing for a natural disaster such as a hurricane can be found. This simple advice includes making sure that you have a store of freshwater, learning your evacuation routes if evacuation is an option and keeping an emergency kit stocked. Advice on what a person or a family should do before, during and after a hurricane can also be found.

Habitat for Humanity works in the United States and around the world, focusing on three main activities: neighborhood revitalization, homebuilding and disaster relief. International hurricane relief is part of their expansive disaster relief program. One division of this program is called Habitat Hammers, which works to rebuild houses after natural disasters. Habitat Hammers missions were launched from Texas to Puerto Rico after the 2017 hurricane season. Over the next five years, Habitat for Humanity will help families affected by the hurricanes which hit Puerto Rico in 2017. According to the government, more than 780,000 houses were destroyed or rendered uninhabitable by the hurricanes. Habitat Hammers will work to build and rebuild houses with families in Puerto Rico.

How You Can Help

Records indicate that hurricanes, typhoons and cyclones are becoming stronger and more frequent as ocean temperatures rise. Devastating storms year after year will increase, and agencies and charities around the world will need help. This can be provided through donations to organizations like the American Red Cross, or by traveling to disaster areas as a volunteer or aid worker. It is a large planet, but in the end, we are all neighbors.