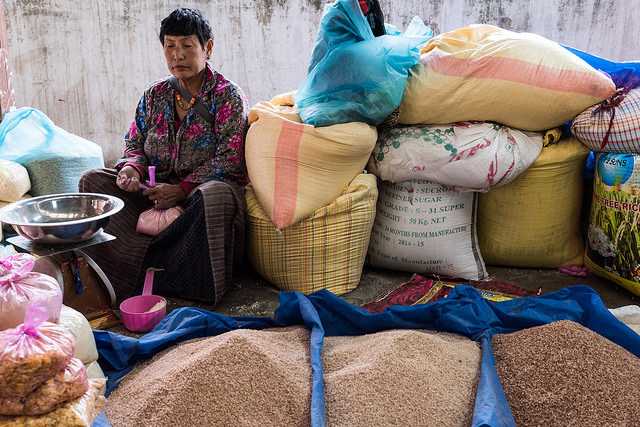 Bhutan, also known as the Kingdom of Bhutan, is a picturesque country bordering India and China and situated in the foothills of the Himalayas. The country has transformed from an absolute monarchy to a constitutional monarchy under the rule of King Jigme Singye Wangchunk. To protect the environment as well as its culture from the outside world Bhutan remained in isolation for a long time. In June 1999, the country legalized television and the internet, slowly moving towards modernization.

Instead of using Gross National Income (GNI), the indicator of socio-economic development, Bhutan measures the quality of life with Gross National Happiness (GNH), a unique way of valuing the country’s self-worth.

Although Bhutan has a lot of potential in tourism, the infrastructure in Bhutan still remains a question. Due to the mountainous terrain, road construction was a challenge for a long time. The few options for transporting goods were porters, ponies or cantilever bridges built over rivers. To overcome this problem, in 1961 a large share of the National budget was invested in constructing a safe and reliable road network. From 1961 to 2002, almost 1231 miles of surfaced road and 102 suspension bridges were built.

With help from the Government of India, Bhutan has so far constructed two national highways, 337 bridges and 409 trail suspension bridges thus creating access to different remote areas of the country. Bhutan Airlines and Druk Airlines connect internationally with India, Thailand and Nepal. In 2005, an agreement was signed between India and Bhutan which provided the opportunity for Bhutan to connect with north-east India. This development is a cornerstone of improving infrastructure in Bhutan.

Another key feature of Bhutan is the generation and export of hydroelectric power which is possible because of the fast-flowing rivers coming from the mountain range of the Himalayas. Under the U.N.’s Kyoto Protocol, a clean development mechanism, Bhutan is estimated to export almost 10,000 MW of electricity to India by 2020. Five major hydropower projects like Tala, Chukkha, Dagachu, Basochhu and Kurichu, which started in 2015, are currently operational in Bhutan.

Quality of water is a major issue for Bhutan especially during monsoons when water contamination diseases like diarrhea take a toll on human lives. In 2005, the Bhutanese government, in partnership with the World Health Organization (WHO), addressed this issue by implementing the Bhutan Water Quality Partnership (WQP) Project. The objective of the project is to provide safe drinking water by giving training and education to the local community, government staff and policymakers. The project has so far been able to improve drinking water for almost 100,000 people.

Bhutan is already considered a heaven for tourists from all over the world who seek peace and tranquility in the tiny Himalayan country. The development of infrastructure in Bhutan will bring more tourists to the country, boosting its economy and increasing its GNI.