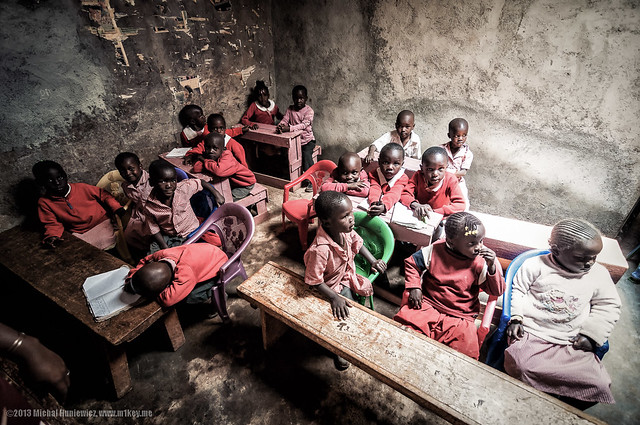 The United Nations Human Settlements Programme (UN-Habitat) estimates that, as of 2010, more than 200 million people in Africa reside in slums. This means more than 200 million people are living their lives in inhumane conditions and circumstances. The children living in these slums have a compromised opportunity at education. According to UNICEF, the youth residing in slums are some of the most disadvantaged and vulnerable youth in the world. Due to the burgeoning need for educational institutions in Africa, informal schools in African slums are gaining popularity.

What are Informal Schools?

Informal schools are unregistered educational institutions that are not recognized by the government. Traditional schooling comes in the form of either private or public schools, and informal schools are a sort of middle ground. They typically operate in impoverished areas and are mostly geared around offering the same education as a primary school. These institutions are funded by private parties and non-profit organizations.

The main reason that the number of informal schools in African slums has been on the rise has to do with a surge of enrollment in public schools. This is, in part, due to the initiative of the U.N. Millennium Development Goals (MDGs), which pushed toward target goals that would reduce poverty, such as improved access to education. This enrollment surge is a positive factor in Africa’s education sector, but comes with a downside: there are not enough public schools to meet the rising need of educating African children, and the usual alternative, private schools, are not financially accessible to most African families. Overcrowding in African schools has been an increasing problem; the pupil to instructor ratio in African primary schools is 42:1.

In response to the need for more educational institutes, informal schools have been sprouting up all over Africa, especially in slums. Characterized by the same steel and dirt architecture in the surrounding slums, these schools offer an alternative option for education. There is a lack of government schools in slums, so private sectors and organizations provide funds for the informal schools.

The Benefits of Informal Schooling

Informal schools in African slums not only facilitate access to education but also offer a safe space for the youth. Many of these schools, such as the Destiny Junior Education Center, offer meals and restrooms, which are not commodities in slum-living. Informal schools keep African children off the streets and in the classrooms, which potentially helps them stay away from the vices that are rampant in slum environments like drugs and alcohol.

The Future of Informal Schools

The next step regarding informal schools is to put policies in place to protect them. There are members in the education committee of the National Assembly that are working toward informal schools being recognized by the government so as to strengthen the quality of education in them.

Overall, informal schools in African slums are an attempt to meet the increasing need for education in slums. By offering an alternative to the congested public schools, these informal education centers provide hope for African youth.