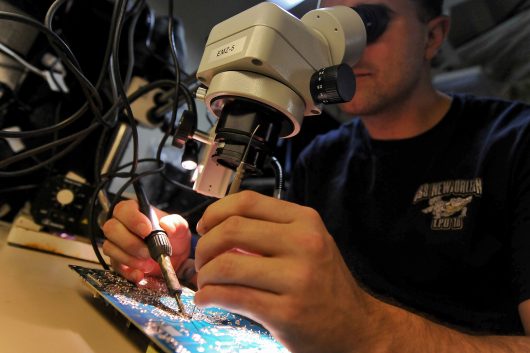 What can you buy for a penny nowadays? Not much, until just recently.

A team of Stanford researchers conducted a study and developed a microchip that can perform multiple, minimally-invasive medical tests. Even better, the microchip takes only twenty minutes to make. This development has the potential to make inexpensive healthcare in developing countries a reality.

The study, which was published on Feb. 6 in the Proceedings of the National Academy of Sciences, recognizes the need for new diagnostic technology in developing and resource-limited areas. The scientists noted that technologies would need to be inexpensive, easy to use and applicable to a wide range of medical situations. The team advised that their microchip is simple enough to be operated by non-specialists, yet it integrates multiple steps and analyses, creating viable point-of-care diagnostic testing. The combination of inexpensive health care and ease of use is a major advancement for developing countries.

Researchers explained that the affected cells must be isolated from healthy cells in order to diagnose common lethal diseases like malaria, tuberculosis, cancer and HIV. Previously, complicated tools like centrifuges, magnets or membranes were necessary to isolate the diseased cells. With the microchip, the process is simple, cheap, portable, reusable and minimally invasive.

The microchip consists of conductive particles printed on flexible plastic. A regular inkjet printer can be used to print the particles using conductive nanoparticle ink. A separate silicone section reserved for storing the sample sits on top of the chip. The chip only requires a sample size barely a millionth of a liter.

Once a sample is placed on the chip, an electric current is applied, forcing the conductive particles to react. The user can then alter the current as needed to sort the cells in the sample and perform a variety of diagnostic tests. Additionally, drug screens can be conducted with this microchip.

A Penny and 20 Minutes

The Stanford team notes in their paper that manufacturing the chip is considerably less expensive and time-consuming over its predecessors, as the process requires only an inkjet printer. Electrical engineer and lead author of the study, Rahim Esfandyarpour, explained, “We designed it to eliminate the need for clean-room facilities and trained personnel to fabricate such a device.” Creating the microchip takes just 20 minutes, versus up to weeks for other diagnostic tools. The best part is the price — just a penny per chip.
Esfandyarpour recognized that the microchip has great potential to provide inexpensive healthcare in developing countries.

“Enabling early detection of diseases is one of the greatest opportunities we have for developing effective treatments,” Esfandyarpour said. “Maybe $1 in the U.S. doesn’t count that much, but somewhere in the developing world, it’s a lot of money.”