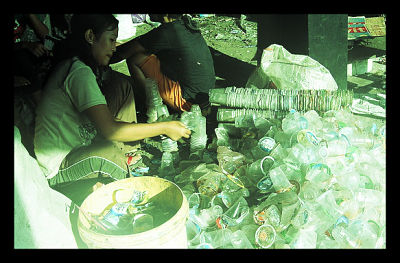 Gamal Albinsaid, an Indonesian doctor, is thinking outside the box with his new method for bringing healthcare to impoverished people. His new idea: trade trash for health services. While this concept may seem strange to many people, the strategy will essentially be resolving two of Indonesia’s major concerns: making healthcare available to people who cannot afford it and disposing of the huge amount of trash that accumulates in the cities and slums.

Through the Garbage Premium Insurance Clinic Program, Indonesians are able to pay for health insurance by  bringing the equivalent of $0.85 in garbage to a healthcare facility every month, instead of paying with cash. These health clinics then give the trash to a “garbage bank” and receive the cash amount. Dr. Albinsaid is proud to have developed a solution for both the healthcare and the garbage problems.

Dr. Albinsaid, who is only 23 years old, was moved by the fact that only 33 percent of Indonesians have health insurance. He is eager to commence the Garbage Premium Insurance Clinic Program to increase this number. The self sustainability of this program will ensure its longevity as a staple in Indonesian healthcare. Although the initial clinics required investor donations, the clinics were self sufficient after six months and able to generate enough profits to open new facilities.

The new system will be implemented in different areas all over the country, mostly in poverty ridden regions, but Indonesia is also improving healthcare in other ways. An improved universal healthcare initiative will potentially cover all its citizens by 2019. Questions over the realistic expectations of the universal healthcare system are being raised by economists as well as by ordinary citizens. Universal healthcare is set to be introduced January 2014, but if for some reason some Indonesians are not included, they have the option to trade garbage for health insurance.

Optifood Software Analyzes Diets to Address Malnutrition Could 2030 See the End of AIDS?
Scroll to top