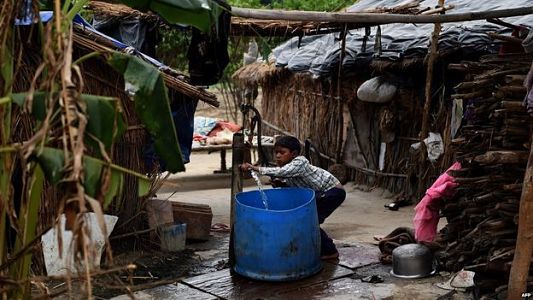 In the Indian capital, around 20% of a population of nearly 10 million have no access to safe, drinkable water—a resource that is supposed to be freely provided by the Indian authorities.

According to the BBC, there is a dangerous gap between supply and demand which has resulted in the official water supply falling short of Delhi’s water needs by 207 million gallons each day, helping to turn drinking water into a pseudo liquid gold. This is due to the fact that around 60% of water intended for Delhi residents is lost as a result of spillage, theft and failure to collect revenue. Official government-sponsored water tanks are also notorious for arriving erratically (at best) in Delhi’s poorest neighborhoods, such as in Sangam Vihar, where they show up “only… once every 10 days or so,” according to Rupa Jha, a local resident.

In response to the gap between water supply and demand, Delhi’s poorest residents have begun to turn to the Indian “Water Mafia,” an informal network of locals who steal water, and then sell it for a profit.

The Water Mafia business follows a model of simple economics. An association of truck drivers, as well as other mostly ordinary Delhi citizens, source water from illicit boreholes found below the earth’s surface, as well as by siphoning water from the city’s pipe network. Tanker bosses then buy water from the men who steal it, who then go on to sell the water directly to locals for a higher price than the $0 it “officially” costs (in Sangam Vihar, for instance, a gallon costs about one cent.) Employees, assuming they sell around a full tank (or 8,400 gallons), are then looking at a profit of $90 per day, or $2700 a month—a much higher wage than the $185 a worker earns in Delhi a month in minimum wage.

While the Water Mafia business is entirely illegal—sourced with water from illegal sources and sold without testing or treatment—it has nevertheless turned into a burgeoning trade that has come to fill in the gap for thousands of poor Delhi citizens who lack access to safe water. Many of Delhi’s poorest residents, in turn, have found that if they want water, they have no choice but to buy into the Water Mafia trade.

The business of stealing and selling water within Indian cities such as Delhi has enormously negative consequences for India’s future, according to authorities and experts who see the human and environmental toll that the practice is taking on the country. The Water Mafia business, for instance, exploits what are already the poorest citizens in a developing country by forcing them to scramble for funds to pay for a resource that is legally required to be free. The practice of extracting liquid for the ground also has negative environmental consequences for the country, especially as it depletes a scarce resource that has already been over-depleted in recent years as a result of India’s population boom. In 2014, for instance, a government report found that three-fourths of Delhi’s underground aquifers were being depleted, forcing boreholes to dig even deeper beneath the surface where water is more likely to be contaminated.

In order to crack down on the growing Water Mafia trade, authorities in recent years have offered a few solutions. In 2013, for instance, the Aam Aadmi Party (AAP) won local municipal elections on a platform of protecting the average person’s interests, as well as their desire to dismantle the Water Mafia business. However, these efforts have been largely ineffective.

According to Rajendra Singh, a conservationist and a winner of this year’s Stockholm Water Prize, however, greater political will and effort could help the country resolve its water issues. Singh, who helped build rainwater-harvesting structures in the arid northern state of Rajasthan, has claimed that major Indian cities have failed to try anything similar. Adopting similar tactics in Delhi—by purifying local rainwater rather than stealing from and depleting water from the city’s boreholes—is one alternative that could potentially help the city solve its water crisis, according to Shah.

In order to protect India’s most at-risk citizens and the country’s long-term interests, it is imperative that an alternative solution—in terms of strengthening the country’s infrastructure and cracking down on members of this illegal water network—need to be adopted. Otherwise, India’s poorest citizens, and those who are most in need of safe drinking water, will continue to have their livelihoods and access to one of humanity’s most basic rights—safe water—be at the mercy of the seemingly unstoppable Water Mafia.

U.S.-Cuba Relations: A New Future for Cuba Police Corruption and Preparing for a World Stage in Brazil
Scroll to top