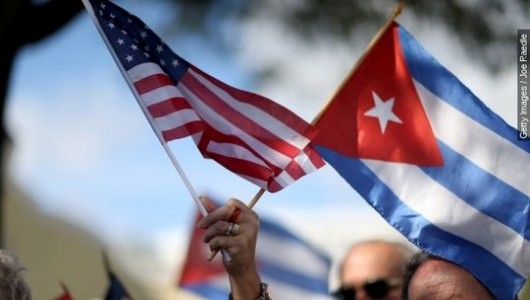 After 54 years of severed diplomatic ties, the United States and Cuba, once bitter Cold War enemies, demonstrated their newfound diplomacy by reopening each other’s embassies this past Monday.

It is the most concrete example of the diplomatic thaw since President Obama and Cuban President Raul Castro announced last December that U.S.-Cuba relations would be restored.

In an interview with MSNBC, President Obama said he believed that Proclamation 3447, the embargo signed by President Kennedy in 1962, has served neither people well and that it was time to go in a new direction.

Although Congress has to pass legislation to formally end the embargo — something that will be very challenging to do — Obama is using his executive power to ease travel and trade restrictions.

For the first time in half a century, the United States is able to transparently see the type of living conditions Cubans have been in for the past 50 years.

There is poverty in Cuba, but it’s not traditional poverty. When Fidel Castro came to power in 1959, the government became Socialist and then reformed to become the Communist Party of Cuba. During this time, all aspects of Cuban society became nationalized. For the past 50 years, Cubans have enjoyed access to a free healthcare system that has produced a very healthy populace.

Today, Cuba ranks 61st in the world for life expectancy. Its citizens live roughly to the same age as their American counterparts. This statistic is even more surprising considering that per capita GDP is almost ten times higher in the United States than in Cuba.

Cubans also have access to free education and the government has tried to make housing and nutrition a priority for its citizens.

Based on government numbers, Cuba ranks 48th in the world for poverty. The island nation is one of the least impoverished countries in the developing world

Although 15 percent of the population still lives in extreme poverty, most of the country is poor. Reports of living conditions are less than ideal. The Cuban peso, which hasn’t been convertible since the revolution, has suffered from inflation. In U.S. dollars, the average Cuban worker earns $17 to $30 a month.

Cuba also scores at the bottom of Freedom House’s annual report on civil and political freedoms. Freedom House describes Cuba as ‘not free.’

Since the Castro family has been in power, Cuba has been relatively isolated. This has led to the country’s lack of overall wealth. The fall of the Soviet Union worsened matters as the country lost the financial support it used to have from Moscow.

The country has persisted; however, this has usually caused Cuba to become more self-reliant, therefore poorer.

Recently, Cuba has tried to reform its economic system to open up investment to other governments and private companies to accelerate development.

The United States re-establishing diplomatic relations with Cuba presents a great opportunity for this to happen. The United States can expand trade markets to one of its closest neighbors, while the influx of capital will raise living standards in Cuba.