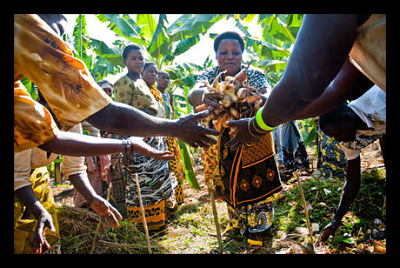 The concept of crop insurance is a well-established practice in developed countries: in anticipation of natural disasters or other impediments to good crop yields, farmers purchase insurance to cover the cost of lost revenue.

Yet traditional agriculture insurance is either unavailable or overly expensive in many developing countries, leaving small-scale farmers, particularly women, vulnerable to natural disasters.

Unlike traditional insurance, index insurance “pays out benefits on the basis of a predetermined index for loss of assets and investments … without requiring the services of insurance claims assessors,” the World Bank reports.

More specifically, “a statistical index is developed before the start of the insurance period to measure deviations from normal for such parameters as rainfall, temperature, seismic activity, wind speed, crop yield or livestock mortality rates.”

Since 2009, GIIF, a program managed by the World Bank Group, has been leading and supporting index-insurance programs across the developing world. In collaboration with partners like MicroEnsure and Kilimo Salama (now ACRE), GIIF often aggregates farmers into groups and enrolls them into insurance programs—an approach both commercially feasible for insurers and empowering for women farmers.

Recent statistics indicate that women farmers in the developing world are at particular risk for agricultural instability. A recent study by the World Bank Group and the ONE Campaign found that although roughly half of the farmers in Sub-Saharan Africa are women, women farmers in Africa produce between 13 and 25 percent less than their male counterparts.

The World Bank Group and the ONE Campaign attributed this difference largely to women farmers’ lack of access to credit and other financial tools.

According to estimates by the Food and Agricultural Organization, if women farmers worldwide had the same access to resources as their male counterparts, “their yields could increase by as much as 30 percent, resulting in 150 million fewer people going hungry.”

GIIF’s index insurance programs are already reaping benefits in many developing countries. In Kenya, a payout initiated by the GIIF program during a drought kept thousands of women farmers in business, allowing them to purchase seeds and fertilizer for the next growing season.

In Haiti, a GIIF partner is offering weather index insurance to 70,000 clients, mostly women farmers who provide essential goods and services to communities.