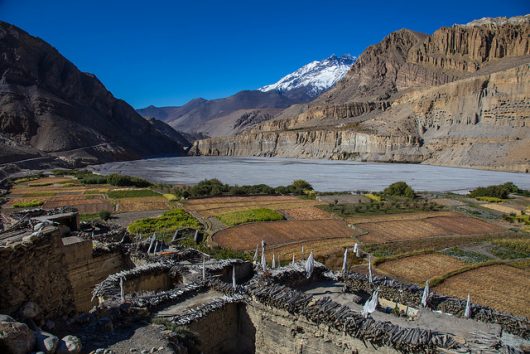 Nepal is a very small country that is found landlocked between India and China. There is evidence that Nepal has been populated in the mountainous regions for as long as 9,000 years. The estimated population of Nepal is 26.5 million and is one of the poorest countries in the world with nearly one-third of the population below the poverty line.

Agriculture in Nepal is central to the economy of this country. Nearly 80 percent of the population relies on agriculture in some way, but there is not enough production to support the population. There is a chronic issue of child malnutrition and an estimated 50 percent of Nepal’s children are affected by stunting. This rate is even higher in the mountainous regions.

Regional Variance of Agriculture in Nepal

There are three major climatic regions in Nepal, with each providing unique crops. The best crop-yielding area is Terai, which borders India. This area has a subtropical climate that supports the production of rice, wheat, barley, oil seeds, jute, tobacco, indigo and even opium. This area is a large crop-producing area but is compromised heavily by the changing climate, which is causing crop yield to be erratic.

The hill regions are crucial to agriculture in Nepal with the farmers being able to produce different crops during different seasons. These farmers of the hill regions can produce rice and maize in the summer and wheat, barley, mustard and vegetables in the winter. This region is also affected by increasing climate change.

The mountainous regions of Nepal have always been a harsh environment for the production of agriculture in Nepal. This area is limited to the crops of potatoes, barley and buckwheat. The harsh conditions cause the farmers to rely on livestock as a key source of income and agriculture in Nepal. Livestock is the main producer of yogurt, cheese, ghee and eggs. These farmers are known to raise Yaks that provide meat, milk and wool as a source of cash.

Nepal’s government has made efforts to improve the production of agriculture in Nepal but has had minimal success. Nepal has many water sources but efforts to provide farmers with irrigation systems have proven inadequate. Nepal’s government introduced chemical fertilizers in the 1950s, which did create a small increase in agricultural production.

The lack of transportation in the mountainous regions has been a major obstacle for exports and the government has provided little improvement in this area as well. In the 1980s, Nepal’s government efforts to increase production began to improve exports with Nepal becoming one of the largest exporters of rice. However, now Nepal has a major food insecurity for its own population.

Food insecurity in Nepal has been exacerbated by changing climate, deforestation and the strike of a 7.8-magnitude earthquake in 2015. Deforestation is eroding topsoil and damaging water sources. The 2015 earthquake caused an estimated 8,699 deaths and a massive rebuilding project. More than 500,000 homes and 1,300 governmental buildings were destroyed, which has had a devastating impact on agriculture in Nepal.

USAID has developed programs to help Nepal’s government rebuild agriculture and help the population to rise above the poverty level. USAID’s Feed the Future Initiative works with Nepal’s government and local development partners to increase agricultural production, create access to markets and improve child nutrition. In just five years, the Feed the Future Initiative has helped more than one million people in Nepal by dropping the poverty level by 36 percent. This project has also decreased the estimated 49 percent rate of child malnutrition to 36 percent in 2016.

USAID has also implemented the Program for Enhancement of Emergency Response (PEER). This program trains Nepalese citizens in search and rescue of collapsed structures. Also, medical first-responders are being trained and hospitals equipped for emergencies. This program was developed in response to the disastrous earthquake of 2015.

The rebuilding of Nepal is a necessity to improve agriculture in Nepal and decrease poverty. Nepal’s government has acted to increase production, but Nepal is still in need of outside assistance. A National Adaptation Programme of Action has begun to help educate farmers on switching crops from wheat and rice to vegetables that can be grown in less time.

Higher yields can produce more income, but Nepal still lacks the ability to support the local population with current production. Agriculture in Nepal is in great need of assistance to reduce poverty and child malnutrition.