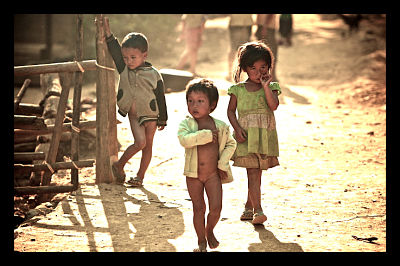 The numbers on poverty are stunning.

The experience of inequality and poverty based suffering is reported again and again in reports issued by international organizations ranging from the UN to the World Bank to the FAO. Poverty robs people of dignity and health to the point that life expectancy falls along with security and quality of life. When the basic rights and needs of people are not met and they are trapped in the cycle of poverty there is an accrued toll on human life. Poverty is so threatening and destabilizing to individual safety and health that it robs people of years of life because the cost and cumulative damage is so great.

The numbers of life lessened by poverty add up each and every day. Every five seconds a child dies of hunger; Every five minutes 19 children under five years of age die of pneumonia; Due to inadequate and substandard medical care, 500,000 mothers every year die in childbirth; five million children every year do not survive to celebrate their fifth birthday.

These numbers imply that there is an inherent cost of life for those who are not privileged and wealthy. In our globalized society, access and participation – which are fundamental aspects of human rights – are not truly guaranteed and protected. One in five, or almost 20 percent of the global population, face barriers to access to food and are unable to participate in the global economy.  Just over 300 million people worldwide have a life expectancy of less than 60 years, partially due to nutrient deficient and incomplete diets as well as the array of maladies and disease that stem from malnutrition and systemic poverty.

Thirty- five percent of the world population does not receive enough protein, and therefore not enough physical energy to function and work normally. Globally, there are 2 billion people who are anemic, including 5.5 million people who reside in countries of wealthy western capitalism.

In the United States, poverty is concentrated along the southern poverty belt stretching from New Mexico, across the deep south and Tennessee and Kentucky, to the Carolinas and Georgia.

A new CDC study recently revealed that states where more than 1 in 3 people live in high poverty areas reported the lowest life expectancy. In regions of poverty like this, burdens such as limited health care, higher crime rates, and poor schools and housing can keep people trapped in poverty and rob them of potential years of life.

Not just being poor, but living in areas blighted by poverty can mean a shorter life span and a stolen future for many people. Underperforming schools, few job opportunities, higher crime rates, poor nutrition and food access, lack of health care and housing all add up to shorter, unhealthier, impoverished lives.

This is no longer an issue of individual security, but larger issues of development, human rights, and economic stability. In order to truly tackle poverty we have to tackle the root causes of inequality, conflict and government corruption. Only when equal access to food and equal enjoyment are obtained can we reach the level of global security where poverty and malnutrition no longer threaten entire countries and limit chances for development and justice.