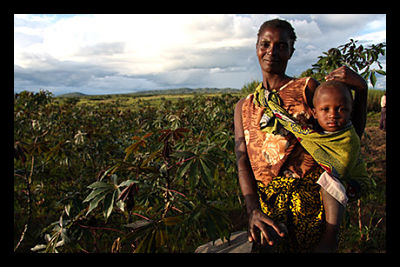 The African country of Zambia has been working to end its epidemic of hunger.  While the World Bank considers the country lower-middle income, hunger is still extreme because economic disparities have grown with the GDP.  The 2012 Human Development index gave Zambia a poor review, ranking it 163 out of 186 countries.  The number of people at risk of food insecurity rose from 63,000 in 2012 to 209,000 in 2013.

An influx of 34,000 refugees, 6,000 of whom receive no assistance from the country, increases the food burden.

Hunger in Zambia has been a major concern, as the country suffers from high rates of malaria, malnutrition, an HIV rate of 12.7% and an extreme poverty rate of 42.7%.  This poverty rate rises much higher in the countryside, where subsistence farming flourishes.

Zambians are highly dependent on rain-fed agriculture, which relies on one harvest that can make or break a farmer’s year.  There is little economic incentive to pursue other fields, and when food and money are tight, farmers often do casual labor at other farms to supplement their incomes.  This causes their own harvests to suffer because they are not devoting enough time to their own land.  Food prices are also high, meaning the supplemental incomes do not stretch as far as they need to when harvests do not supply enough food.  This has led to a 45.4% rate of malnutrition; almost half of Zambian children are deficient in vitamin A and iron.

Malnutrition and the dependence on unreliable agriculture has led the country to low educational and economic attainment.  Farmers do not have the ability to focus on anything other than putting food on their tables.  While educational enrollment has increased, Zambians only complete an average of six years of education.

Another organization working in Zambia is Women’s Empowerment through Animal Traction (WEAT).  WEAT works with Heifer International and the World Food Programme to provide households with draft animals.  The focus is on providing women with a means to support their families.  The draft animals allow women to plant crops quickly and efficiently, while also supplying milk.  The offspring of these animals go to other families in the community, allowing more farmers to increase their outputs.

Action Against Hunger works specifically with families affected by HIV and AIDS.  The organization helps people take up activities that create income, such as raising rabbits or poultry.  It also educates people about HIV and AIDS.

Innovations for Poverty Action funded a study in 2012-2013 which gave loans of maize to farmers during the lean season.  The goal was to keep farmers from needing to seek additional employment on other farms.  The results showed that food consumption increased, casual labor decreased and there was evidence of an increase in local wages.  These positive signs led the study to expand in January 2014.  Now IPA will give 3,000 households the opportunity to receive loans of food and cash, and it will measure crop yields and nutrition at the end of two years.

In addition to all of these programs, Zambia has joined with other African nations to plead with their governments to invest more in agriculture.  The request is for an increase in effective agriculture investments of at least 10%, with a focus on support for small farmers, especially women.  Vice-president Guy Scott received the petition for Zambia.  In total, over two million African citizens have signed petitions in support of this legislation.