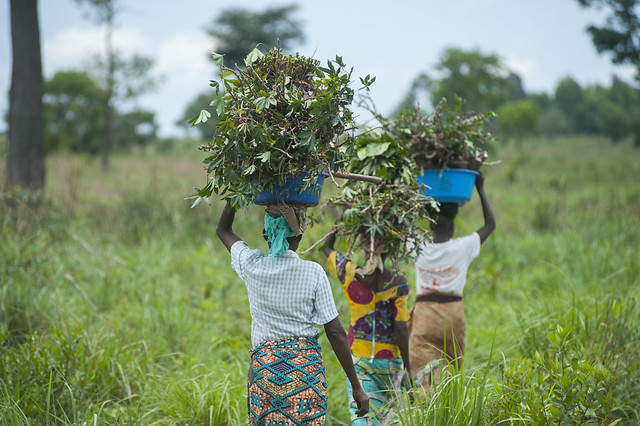 The ongoing conflict in the Democratic Republic of Congo (DRC) has forced many people to abandon their livelihoods, preventing them from making a living to provide for themselves and their families. According to the World Food Program, the Democratic Republic of Congo ranks second in the list of countries facing the world’s worst hunger crisis. Approximately 15.6 million people are food insecure in the DRC our of a total population of 86 million. Additionally, hunger in the DRC is causing many children in the country to suffer from malnutrition. Approximately 3.4 million children are acutely malnourished.

The current conflict in the Democratic Republic of Congo started in 1994 after some perpetrators of the Rwandan genocide escaped to the country to form their own rebel group. As a result, other armed groups saw an opportunity to begin rebelling against the government and a civil war began within the DRC in 1998.
Even after the war ended, the country continued to suffer conflicts between different armed groups, ethnic groups and inter-communal groups. If not for the ongoing conflict, the Democratic Republic of Congo would have the capability of feeding its country. According to WFP, this amounts to 2 billion people.
The country has 80 million hectares of arable farmland available. It also has half of Africa’s water resources along with the capacity to fish for 707,000 tons of fish.

But with the ongoing conflict in the Democratic Republic of Congo, many people are finding it difficult to find food for their next meal. In fact, 70% of those with employment in the DRC work in the agriculture sector. Currently, only about 10% of land in the Democratic Republic of Congo is cultivated. Families in the DRC are only producing 42% of the food that they need, so a lot of them, especially refugees from conflict regions, are dependent on aid.

Many children are suffering in the Democratic Republic of Congo from lack of food. Child malnutrition is one of the leading underlying causes of death among children under 5. The child mortality rate for those under 5 is 88.1 deaths per 1,000 live births. To help fight against malnourishment and hunger in the DRC, the World Bank is spending $502 million through credit and grants to help finance the Multisectoral Nutrition and Health project.

Organizations Helping During the Food Crisis

To help with hunger in the DRC, some organizations are working to train local farmers to help them produce more food. In 2020, a joint FAO, UNICEF and WFP project, which leverages the strength and expertise of each organization, aims to help farmers in the DRC. For example, the FAO will focus on supporting small farmers, while UNICEF will help reduce malnutrition and improve access to water and sanitation, while WFP will turn its attention to “commodity aggregation.” The goal of the project is to support farmers by helping them “strengthen their agricultural production and post-harvest management, diversify their income-generating activities, and improve nutrition and basic social services.”

The Democratic Republic of Congo is a country endowed with rich resources and good arable land. However, constant conflict in the region has made it difficult for families to make a living. Perhaps help in the form of money and humanitarian efforts will allow the DRC to take steps in the right direction.