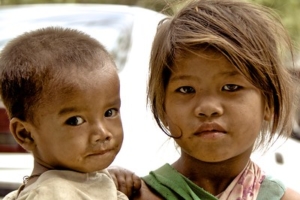 Myanmar, also known as Burma, is a nation with a diverse population of approximately 53 million people of at least 135 different ethnic groups. While it is the second-largest country in Southeast Asia, Myanmar remains one of the least developed nations in the world.

Progress in the fight against hunger in Myanmar

Despite these achievements, more than a third of Myanmar’s population who live in poverty spend a significant amount of their limited income on food, and they are still struggling with malnutrition.

Malnutrition among the under-five population is a serious factor when it comes to the state of hunger in Myanmar, as it hinders the children’s growth and development. This issue also exposes these children to various illnesses.

Approximately 29.4% of the children under five were stunted in 2016. While this percentage is indeed an improvement from the national prevalence of 35.1% in 2009, it is still significantly high when compared to an average of 25% in other developing countries. In some states or regions, the prevalence could be upwards of 41%, indicating that 4 in 10 children will not be able to reach their full potential in life.

Malnutrition due to poor diets not only negatively affects the children, but is also a great burden to the adult population in Myanmar. A staggering 46.3% of women of reproductive age have anemia, while 7.9% of adult women and 6.9% of adult men are diabetic. Meanwhile, 4% of men and 7.3% of women are obese, leaving them at risk of different cardiovascular diseases and other serious health consequences.

The Rohingya people are among those who are the most at risk of poverty and hunger in Myanmar, a predominantly Buddist nation. The Rohingya population, a large majority of whom are Muslims, has long been experiencing discrimination, restrictions from basic services and denial of citizenship by local authorities despite condemnation from the international community.

In 2017, after attacks from the Rohingya insurgents killed several members of Myanmar security forces, the Myanmar military ferociously retaliated by massacring and destroying villages in the western Rakhine state. This forced nearly 700,000 Rohingya Muslims to flee to Bangladesh. After the army crackdown, the World Food Programme (WFP) estimated that more than 80,000 children under 5 years old living in parts of western Myanmar were wasting and may need treatment for malnutrition.

Withholding food supply or forced starvation are other strategies being used against the Rohingya Muslims to drive them away from their homes. The Rohingya refugees interviewed by Amnesty International reported that soldiers blocked them from accessing rice paddies and other food resources, stole their harvests, and gave their food and livestock to non-Rohingya neighbors. Sometimes they would have to go for several days without food.

Hundreds of thousands of Rohingya Muslims who have been displaced due to violence in previous years must live in makeshift shelters with appalling living conditions and under direct threat of dangers caused by monsoon rains. Surveys show that 38% of children living in these camps are stunted, and at least 12% are suffering from severe malnutrition.

Assistance from the international community

High exposure to natural disasters, armed conflicts or inter-communal clashes are just some of the numerous challenges that Myanmar faces. These factors combined leave a large proportion of Myanmar’s population suffering from poverty and hunger. It is estimated that nearly 1 million people are in need of humanitarian assistance.

Since 1994, Action Against Hunger has worked to fight hunger in Myanmar by improving nutrition, food security, water quality, sanitation and hygiene in vulnerable communities where ethnic minorities reside. In 2018, the organization’s nutrition and health programs reached 26,751 people. Another 19,461 people benefited from the water, sanitation, and hygiene programs, while 23,790 people were helped by the food security and livelihood programs. In just 2018 alone, Action Against Hunger has reached 76,312 in vulnerable communities across Myanmar.

The organization also works to respond to the urgent needs of the displaced Rohingya people who fled from violence in Myanmar. In just one year, Action Against Hunger has helped more than 700,000 displaced people with food security and livelihoods, mental support and care practices, water quality and access, and hygiene and sanitation.

Despite the challenges, Myanmar has achieved the 2015 Millennium Development Goal of halving hunger and reached the status of a lower-middle-income country in the past decades. Many organizations are working hard alongside the government to alleviate poverty and hunger in Myanmar. However, with the conflicts between Myanmar’s authorities and the Rohingya Muslims remains ongoing inside the nation, there is still a lot of work to be done.