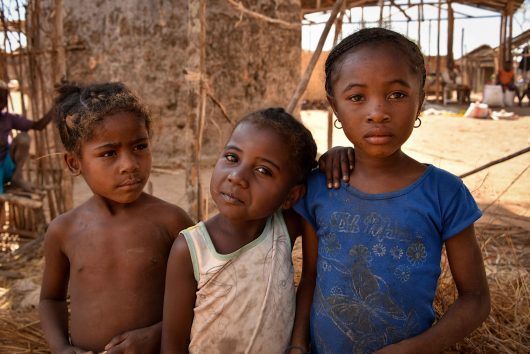 While Madagascar was made famous by the 2005 DreamWorks animated movie about talking zoo animals, it is also one of the world’s poorest nations, with four million people suffering from lack of food access.

Drought, cyclones, floods and locust infestation worsen the case of hunger in Madagascar. Natural disasters are likely to grow worse with the continuation of climate change. Madagascar is one of the 10 nations most vulnerable to natural disasters affecting food security and nutrition.

Those who live in southern Madagascar are most likely to suffer from hunger because the lean season takes up a much longer portion of the year. The lean season is the period of time in between the harvest and the first plant of the next season. During this time, poor farmers and their families have little food or income on which to survive.

In 2016, a drought worsened by El Niño, an irregular and complex series of climatic changes, left 1.4 million people in Madagascar desperately short on food. These people are expected to face food shortages through 2017.

Crop failure causes people to take desperate measures to survive, such as selling their livestock and farming tools and moving into the wild to forage. Over 90% of Malagasies live below the poverty line.

Chronic malnutrition affects nearly half of all the children in Madagascar under five. Hunger in Madagascar also results in stunted growth in children and high mortality rates. Anemia is one of the biggest health issues in Malagasies facing hunger, with one-third of children under five and women suffering from iron deficiency.

More than six percent of children die before they reach five years old, and 500 out of every 100,000 live births result in the mother’s death. High levels of anemia lead to this high maternal mortality rate.

Despite the bleak outlook caused by hunger in Madagascar, not all hope is lost. The World Food Program (WFP) works in conjunction with 30 other organizations to relieve Madagascar’s most vulnerable regions, including the South and poor urban areas.

This is done through:

To help relieve hunger in Madagascar, you can make a donation to the WFP.