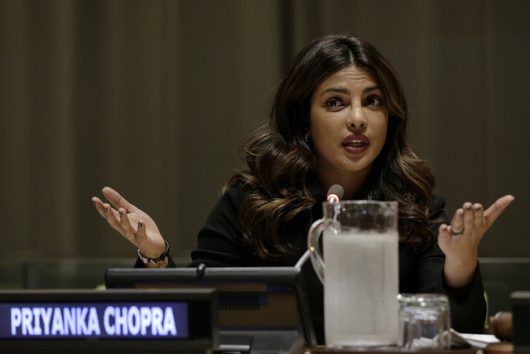 Brought to fame by winning the Miss World title, Bollywood actress Priyanka Chopra has been making waves globally. Not only has she starred in the ABC primetime show Quantico, but also she has acted in the Hollywood movie Baywatch. The humanitarian side of Priyanka Chopra, however, is one that her fans are often not aware of.

Chopra is a UNICEF Goodwill Ambassador and has sponsored the education and medical costs of seventy children in India. Furthermore, 10 percent of her income goes toward running her nonprofit, the Priyanka Chopra Foundation of Health and Education.

Chopra was introduced to social work at the young age of nine. According to the New York Times, her parents would take her on trips to the underdeveloped regions of India to provide medical assistance. There, she witnessed the blatant discrimination between girls and boys. “Parents believed that their sons were better than their daughters,” Chopra recalls.

Her experiences as a child are reflected in her choice of working with young children, especially young girls. Recently, Chopra spent two days in Jordan to visit Syrian children. She told UNICEF that “an entire generation of children are being shaped by violence and displacement.” Furthermore, she explains that this catastrophe does not only encompass Syrian citizens but the entire world–it is a humanitarian crisis.

The Za’atari refugee camp harbors the highest number of Syrians in Jordan. Chopra spent time meeting with girls there at the school sponsored by UNICEF. While chatting and playing with the children, she faced the harsh reality of child marriage and the dearth of educational resources. There were “too many girls younger than 18 with kids,” she explained to UNICEF.

Although they are eager to learn and often hope for professional careers, there are not enough resources for these children to get a competitive education. Many doors of opportunity close to these children when they become part of the job market in the future. The Washington Post reports that over half a million Syrian refugees of school age are not enrolled in school.

Chopra, however, should not be underestimated in her mission to make sure that “no child is denied a dream.” Although she cannot eradicate poverty, she surely will do her best to encourage and support many children globally, as she has already done in her native country, India.

Other than her collaboration with UNICEF, as a producer, she has also encouraged underprivileged artists. By producing movies in Indian regional languages, she gives artists an opportunity that would have otherwise been ignored. Her latest movie, Pahuna, highlights the conditions of refugees in the Indian state of Sikkim.

Forming personal relationships with the children and posting her experiences on social media, Chopra is using her platform and reach to expose the world to the reality of many troubled countries. The humanitarian side of Priyanka Chopra is slowly coming into the view of the world.

Chopra once told the New York Times that “these young people have the potential to transform society if we invest in them.” Since then, she has proven on multiple occasions her commitment to the youth of the world.