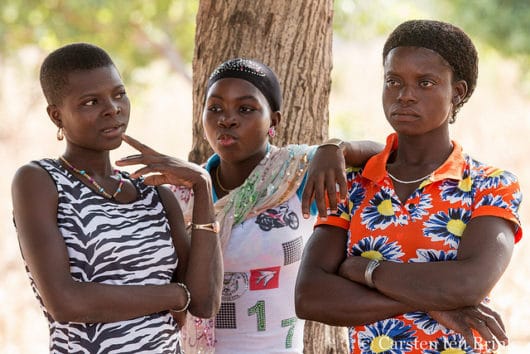 The West African country of Togo has a long history of military rule and had General Gnassingbé Eyadema installed as president from 1967 until his death in 2005. Under his leadership, many human rights abuses were reported and he tightly controlled all aspects of the Togo government.

Soon after General Eyadema died, his son Faure Gnassingbé was appointed as president by the Togo military. However, he yielded to the objections of foreign and domestic protesters and held elections. He won the elections, but the legitimacy of the elections have been a subject of ongoing debate, and his presidency remains controversial because his family has essentially maintained a 50-year-long dynasty in Togo. However, under his rule Togo has demonstrated gradual democratic improvement, holding legislative elections in 2013 and a presidential vote in 2015 that was deemed credible by the international community.

Although women in Togo are legally considered equal to men, in many ways they are treated as second-class citizens. Togolese women are three times less likely to be sent to primary school, they experience a great deal of discrimination both in searching for work and once they find a job and they must defer to their husbands or brothers when it comes to managing the household. A woman, according to Togolese tradition, can never be the head of her own household. Although women in Togo are positioned as the inferior sex according to the customs of the country and gender discrimination is still prevalent, they still empower themselves by finding unique and creative ways to get their voices heard.

In 2012, a group of Togolese women from an organization called Let’s Save Togo resolved to go on a sex strike in a hope of persuading their male counterparts to take a stand against President Gnassingbé. This sexual boycott, also known as a Lysistrata, was inspired by the Liberian activists who held their own sex strike in protest of violence against women in 2003. Though the Togolese president ultimately did not step down at that point as a result of the strike, it was a notable example of how a nominally disenfranchised group could find a way to speak out and take a stand.

The movement opposing the rule of President Faure Gnassingbé is still very much in effect and Togolese women continue to play a critical role despite the dangers associated with trying to topple such a powerful man. The market women of Togo are largely responsible for financing the opposition to Eyedema, and in return, two of their buildings have been burned down by the government. Though officially a republic, Togo has essentially operated as a dictatorship, with the same family in power for over 50 years, and the Togolese women have had enough.

Faced with economic and political challenges in a country that still has a dismal ranking of 134th in U.N. Women’s Gender Inequality Index, Togo women empower themselves with an inner strength and resilience that transcends generations of oppression. The nongovernmental organization Plan International Togo is lending their support with a variety of programs for women and girls. They are providing health education, early marriage prevention and training on citizenship and the basics of government so that women can become more active in the political process.

Togolese women have always been on the front lines of political change, even fighting increased taxation during the period of French colonialism. They continue to make great strides, seemingly undaunted by the limitations that society has tried to impose on them. The way that Togo women empower themselves today would make their predecessors very proud.