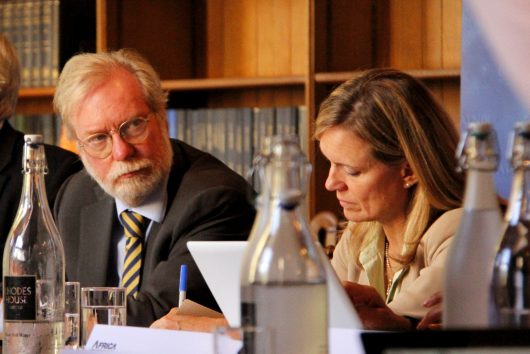 How to end poverty? In Paul Collier’s thought-provoking TED talk presentation, he hypothesizes the best ways to improve the lives of the most economically deprived billion people of the world. A majority of these people live in commodity-rich countries in Africa.

He talks about how foreign aid is being trumped right now by the recent influxes in commodity prices. This is bringing unprecedented wealth to countries that have never experienced such things. He states that the problem with short-term economic growth tied to one commodity is that it is often short-lived. And in most scenarios, the country is worse off once the price of that commodity declines to previous levels.

Collier is not the only one to identify this problem. Larry Diamond of Stanford University has said that “there are twenty-three countries in the world that derive 60 percent of their exports from oil and gas and not a single one is a real democracy.” He observes that there is a strong correlation between energy dependence and authoritarianism. Authoritarian governments will use their profits from commodities to enrich those close to power and not spread the wealth amongst the entire country.

Collier believes that the only way to sustain the gains of short term commodity-driven economic growth is by developing international standards of economic governance. By establishing procedures and requirements for governments to enact when they are experiencing a boom, they have a much better chance of improving the quality of life in their country.

One example he provides is establishing public auctions for drilling rights. Most commodity deals right now are agreed upon behind closed doors between a representative from a large private sector western firm and a local magistrate. More often than not the western firm gets a far better deal than that of the magistrate because the magistrate is not aware of the actual value of the commodity he is selling rights to. By creating public auctions, you are allowing market forces to drive up the price of the contract which allows the country in which the commodity resides to gain more wealth from the deal.

This is just one aspect of the international economic governance reforms he would be interested in enacting. But such a small tweak in the way business is currently done could pay huge dividends in the effort to end poverty.

The international norms he would establish would be adopted on a voluntary basis. The ultimate goal would be measured on two fronts.

One, to improve the lives of the indigenous people by establishing funding requirements with commodity profits for clean water, healthcare, and education. This would lay the foundation for non-commodity fueled sustained economic growth and answer the “how to end poverty” question.

Second, to remind the Western democracies of our enlightened self-interest. A potential billion more people in the marketplace will create an increase in global demand that will be realized amongst all economic sectors.

To the question of how to end poverty, Collier believes the countries that are home to the world’s poorest billion have all of the resources at their fingertips. They just need guidance from the international community on how to improve the economic conditions of their people.

Ten Facts About World War II What is Ethnic Cleansing?
Scroll to top