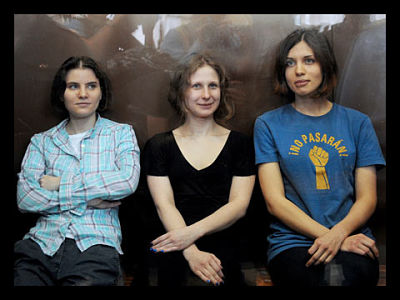 Pussy Riot, a Russian feminist punk-rock group that stages anonymous political anti-establishment performances in controversial places throughout Russia, is a band that is introducing political art in a way that most Russians are unfamiliar with. Until now, much of Russian art was either propagandistic or entirely apolitical; now, Pussy Riot and street art groups like it are introducing art with the purpose of political change.

Pussy Riot became famous in February 2012, when they staged a performance in their typical garb (brightly colored dresses and balaclavas) at the altar of the Cathedral of Christ the Savior in Moscow. The performance lasted less than one minute before three of the seven participants were dragged off the altar and arrested for “hooliganism” (similar to disorderly conduct).

The group’s performance wouldn’t have made nearly as much of an impact if it weren’t for many important factors:

Pussy Riot’s trial gained media attention in Russia because of the enormous political and social implications of both their actions and the resulting trial. However, the leftist political group Pussy Riot is doing more than just fighting Putin’s government.

The general public in Russia is conservative leaning. Vladimir Putin, current president of Russia, is sponsored by the political party United Russia, which is Russia’s leading conservative political party. United Russia supports the neoclassical economic model, meaning it focuses on the economic activities of production, distribution and consumption. Neoclassical economics exclude all non-market activities, which is the financial antithesis of feminist economics, which shows that including non-market activities removes substantial gender biases from social order.

Excluding non-market activities from GDP analyses literally devalues the work done disproportionately by women, and when an entire half of the population’s financial contributions are significantly devalued, less money is available for social programs. This is a contributing factor as to why poverty rates generally increase in places that don’t provide equal social and professional opportunities for men and women (for example, based on Hofstede’s Power Distance Index, Bangladesh is extremely hierarchical, and over 70% of the population lives on less than $2/day. In contrast, Denmark is one of the most egalitarian nations in the world, and only 13% of that population lives below the poverty line).

Of course, with such a divisive performance, Pussy Riot turned off an abundance of people in Russia. However, what Pussy Riot is doing is slowly gaining supporters for left-leaning economic policies. When non-market activities are included in the calculations of Russia’s GDP, the numbers will be notably more accurate, meaning more money will appear, and there will be more money available to the public. This will be a long process, but undoubtedly one that will bring many in Russia out of poverty.