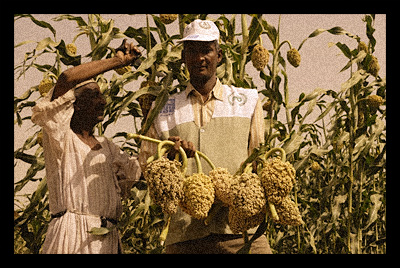 The story of farming in the developing world is a completely different one. In the US, agricultural workers make up a very small portion of the population, but agriculture employs anywhere between 50 percent and 90 percent of the population for farming in developing countries. Of this percentage, small farmers are the most prevalent form of producers, making up 70-90 percent of those working in agriculture. According to the Bill and Melinda Gates Foundation’s website “Three-quarters of the world’s poorest people get their food and income by farming small plots of land about the size of a football field.”

As such, helping these small farmers in developing countries increase production and sell more crops is the best way to combat global hunger and poverty. The difficulties in increasing production for these farmers include unproductive soil, plant diseases, pests, and drought. In many cases these small farmers trek miles to the nearest water source and are only able to bring enough water back to produce small amounts of crops. Lack of access to improved seeds or fertilizers and pesticides further add to their hardships, in addition to a lack of reliable markets and little available pricing information.

One important aspect of furthering agricultural production in developing countries is pushing for empowerment and equality of women in these nations. In Asia, women produce 60 percent of agricultural products, and in Africa that figure is 80 percent. However, these same women also are not given equal access to credit which could enable them to afford quality seeds, fertilzers, and water pumps, increasing their production and providing more food to their communities. If women farmers were given equal access to resources, developing countries would see significant increases in agricultural productivity.

Other ways to aid these small farmers include investment in technological innovations, such as cheap solar-powered water pumps, and giving farmers better access to information about the markets they are selling to. Thanks to new information technologies, farming knowledge can now be transferred across regions through radio, internet, and mobile phones.

The important thing to note about farming in developing countries is that such a large portion—up to 90 percent—of the economy is made up of agriculture workers. If innovations and policies can improve their standard of living then the majority of the poor in many developing countries would be lifted out of poverty. Out of their rise from poverty comes new consumers and contributors to the global economy, benefitting not just developing countries, but developed ones as well.