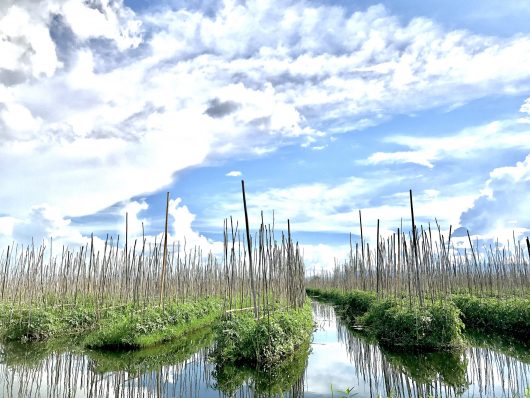 One of the most innovative technologies used to combat poverty, particularly in places where climatic conditions and rising sea levels impair local agriculture, are floating gardens. Areas such as Bangladesh, which are now below sea level in many places, do not have the land to grow crops; thus, floating gardens allow farmers to grow crops in the absence of arable land. Here is how floating gardens can tackle poverty.

Floating gardens were first used by the Aztecs in Tenochtitlan, and consisted of a raft woven from water hyacinth on top of which soil and manure were placed. From this structural orientation, farmers have been able to grow crops without the need for adequate farming land.

Today, farmers in many countries, such as Bangladesh, suffer from poor growing conditions due to flooding from monsoons and rising sea levels. It was reported in the New York Times that “the country’s climate scientists and politicians have come to agree that by 2050, rising sea levels will inundate some 17 percent of the land and displace about 18 million people.”

When water saturates soil and air — which plants need for nutrient uptake — growing and cell division are restricted; this process is referred to as waterlogging and is a major concern for farmers in Bangladesh.

Farmer productivity is also weakened by lengthy dry periods. According to Practical Action, an organization that fights to mitigate these obstacles for farmers, “Growing conditions are already challenging as the clay soil becomes hard during the dry season (November to March) while prolonged rain during the monsoon (June to October) causes flooding.”

Floating gardens are a way for farmers to adapt to climate conditions and gain control over the production of crops for selling for both their productivity and for their own families. In this way, floating gardens can tackle poverty because they are economically beneficial to farmers who would otherwise have great difficulty doing their jobs.

These contraptions increase efficiency and raise income levels for farmers. In addition to raising household incomes, floating gardens also save households money by reducing amounts spent on vegetables as households can now grow their own. According to the Horticulture Innovation Lab at UC-Davis, one floating garden provides a family with pesticide-free vegetables for a year.

Another benefit of floating gardens is food security. According to the Independent, thanks to the efforts of the Practical Action residents of rural villages in Bangladesh now get at least 1,800 calories per day. In this way, floating gardens have reduced hunger and by growing their own crops, households now have pesticide-free vegetables.

A flyer published by Penn State asserted that potential effects of long-term exposure to pesticides include birth defects, tumors and blood or nerve disorders; in mitigating these effects, there are also health benefits to growing a floating garden.

There are numerous ways in which floating gardens can tackle poverty, including increased income and efficiency for farmers, and improved health for consumers of the crops. According to the World Bank, agriculture has been a key step in fighting poverty in Bangladesh. Poverty dropped from 48.9 percent to 31.5 percent between 2000 and 2010.

Additionally, over 87 percent of rural people receive some income from agricultural activities. In this way, finding a dependable method of crop production will be key in fighting poverty in countries such as Bangladesh.

The Elimination 8: Ways of Shrinking Malaria in AfricaHow the Media Misrepresents Lebanon to be Unsafe
Scroll to top