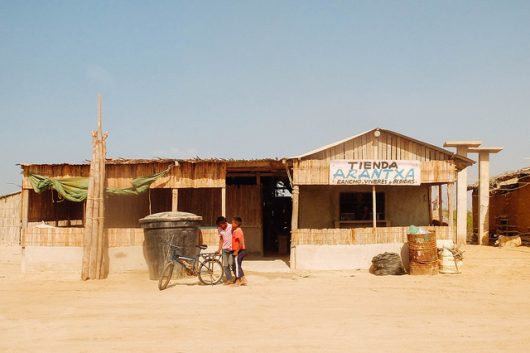 When it comes to environmental preservation, plastic represents a huge global problem. The average American or European throws away 100 kilograms of plastic per year, as reported by the Worldwatch Institute in 2015. The plastic waste issue not only affects the environment but also increases poverty. Fortunately, initiatives all around the world are trying to fight plastic pollution by promoting recycling while also reducing poverty by building houses made of plastic.

This Bogota-based company produces low-cost houses made of plastic; each one averages around 430 square feet. Since 2010, Conceptos Plasticos has been building temporary and permanent homes, shelters, classrooms, community rooms and other buildings in Colombia.

Founded by Colombian architect Oscar Mendez, the company transforms the recycled plastic into Lego-like bricks that are easy to assemble and contain additives that make them resistant to fire and earthquakes. Its clients are the government, non-governmental organizations, foundations and private companies, who pay for housing solutions in the communities where the houses are built. Each house costs the equivalent of $130 per square meter.

Conceptos Plasticos provides the materials to be used by the communities and gives people training on how to build the houses. A home for a single family is built by four people with no experience in construction and takes only five days to be built. In 2015, the Colombian startup helped build a shelter for 42 families displaced by the violence in Guapi, Cauca, recycling a total of 120 tons of plastic.

EcoDom’s Innovative Houses Made of Plastic

In Mexico, every year 800,000 tons of plastic waste is produced and only 15 percent is recycled. To minimize this problem, Carlos Daniel Gonzalez founded the Mexican startup EcoDom, which means “Eco House”. The company recycles everything from soda bottles to toys and turns it into material to build houses made of plastic. It works with local trash collectors in Puebla to achieve its goals of reducing plastic waste as well as improving Mexico’s economy through affordable housing.

EcoDom is helping reduce the number of Mexican people living in poverty, which currently stands at 63 million. So far, the startup has built more than 500 houses out of recycled plastic at a cost of less than $300 each.

The Eco-Inclusion Foundation is an Argentinian network of NGOs that manufactures ecological bricks made of plastic. Founded in 2014 by entrepreneurs Leandro Miguez, Leandro Lima, and Fabio Saieg, the organization works to reduce plastic waste and have a social impact by building houses out of the recycled plastic.

Eco-Inclusion has 45 plastic collecting spots in four cities. They turn every 20 plastic bottles into one brick and can produce 20 bricks in one hour. The plastic bricks have the same characteristics as a regular brick. They are also light, insulating and are made with a production process that does not damage the environment.

The bricks, built in partnership with Ceve-Conicet, are used to build community spaces that help the most impoverished people of Argentina. Right now, with the help of volunteers, the trio of entrepreneurs is building a dining hall and bathroom for an Argentinian soccer club, attended by hundreds of children.

If more people support these projects, two huge global issues can be minimized: plastic waste and poverty. It is a way of both helping the environment and improving people’s living conditions.