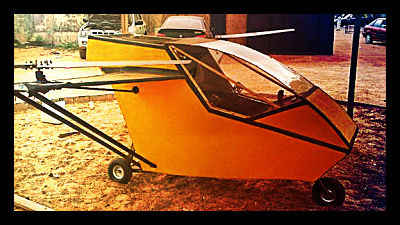 A growing movement in Africa finds solo innovators experimenting with homemade flight technologies out of mere curiosity. The daring, Wright-esque pioneers involved are sourcing materials from scrapped vehicles and local junkyards to build helicopters, and even piecing their projects together with cheap gum. One would-be pilot, Gabriel Nderitu Muturi from Kenya, hopes the interest in flight will one day lift Africa out of poverty.

On the ground, individuals are making progress with their flying machines, from life-size, remote control helicopters to two-seater airplanes, but they receive no governmental support for their projects. In some cases, the government obstructs the aviation development. One man had his helicopter confiscated as a security risk and was fired from his job for pursuing the interest on the basis of media attention distracting from his work. Those continuing the fight for flight say such obstacles result in wasted talent that could help lift developing nations and their people out of poverty. The technological curiosity is apparent, but the capacity and reward system stands lacking.

Hackerspaces and fab labs have cropped up to support the solo innovators in impoverished nations, where government assistance is either minimal or nonexistent, but they are by no means commonplace. For creators of homemade airplanes these spaces are a veritable Godsend, as they offer community-based resources and the actual space to design and experiment. Without these spaces, these pioneer inventors would face many obstacles to the flight of their helicopters.

Mr. Muturi reports his use of the Internet as the most significant variable in his formula for success. He cites the web as a source of information for research and a marketplace for fabrication as it allows him to order parts from the United States. Though he completed the project on his own, he urges governments to recognize the importance of supporting interest in science and research as an indispensable resource that will pull Africa out of poverty and underdevelopment.

In light of increased fiber optic connectivity from more developed nations investing in Africa, the Internet will likely prove a valuable resource for individual and community-based projects like Mr. Muturi’s. Nonetheless, there is the problem of providing such a resource to rural communities, where e-learning depends on first establishing free digital centers, heretofore inadequately represented in such locations.

Is the World is Getting Better for Children?Single Mothers and Poverty in Latvia
Scroll to top