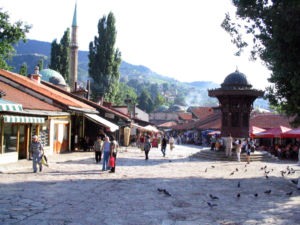 Homelessness in Bosnia is a multinational emergency. Recent snowfalls in Bosnia’s Northwest region threaten the lives of thousands of migrants. The region, a de facto landing ground for thousands of migrants, is the site of a mounting humanitarian crisis. Bosnia and Herzegovina, which functions as a buffer state between the Eurozone and parts of eastern Europe, have served as holding grounds for migrants. Even more worrying, the COVID-19 pandemic has further strained these communities.

At the beginning of the pandemic, close to 2,500 migrants struggled without access to shelter. As a result, the International Organization for Migration (IOM) established a facility that could serve as living quarters for 1,000 migrants in Bihac, one of Bosnia’s major northern cities. The facility provided “basic humanitarian aid, including accommodation, food, hygiene, sanitation and medical care.” Previously, IOM increased the capacity of a shelter in the Bosnian capital city of Sarajevo.

At least 2,500 of the 10,000 migrants who are held up in Bosnia, in limbo between the Eurozone and the countries they fled, live outside without proper shelter. They are exposed to the elements, and seasonal weather conditions will make their situation much worse. IOM tent camps have served as temporary shelters, but they are inadequate solutions for the winter.

An estimated 25% of rural Bosnians live in poverty. This statistic doesn’t include the rate of poverty among migrants who live in the country. A variety of reasons have been cited for Bosnia’s poor economy. However, the fact of the matter is that Bosnia lacks the resources to provide safe facilities for migrants.

There is no clear solution to the dangerous conditions that migrants in Bosnia will have to endure this winter. However, one could come from a collaboration of the Bosnian government with governments in the Eurozone and international organizations. Euro-Mediterranean Human Rights Monitor called on the Bosnian government to construct emergency facilities. In addition, it cited international law as the basis for its demand. In an effort to ensure that international law is upheld, Amnesty International filed a complaint against local authorities after reports of violence against migrants were reported.

To that end, Euro-Med Monitor underlined the role of the European Union to “establish a monitoring mechanism in Croatia to ensure that the authorities deployed at the borders respect migrants’ fundamental rights and European law, including their safe access to asylum procedures.” Additionally, IOM began to distribute winter kits, including food and sleeping bags, to thousands of migrants in October. Future funding may come as a result of the United Nation’s appeal for $455 million to address the global refugee crisis.

A concerted effort between advocacy groups and governments is required. So long as the world decides that Bosnia’s marginalized populations deserve the world’s support, then there is hope.