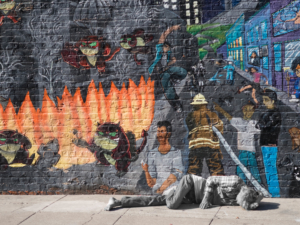 The ABS’s, criteria for defining homelessness doesn’t simply end at someone sleeping out on the streets. Instead, the ABS states that a person is homeless if they are living in accommodations that are inadequate or in housing that has no long-term tenure. This broad definition of homelessness means that if a person is couch surfing with friends to relatives, they are considered homeless.

The Australian Institute of Health and Welfare’s 2016 report found that “58 percent of homeless people were male, 21 percent were between the ages of 25 and 34 years-old and 20 percent of homeless people were Aboriginal and Torres Strait Islanders.” The last finding is especially troubling since Aboriginal people and Torres Strait Islanders only made up about 3 percent of the population. For women who are homeless, domestic violence was one of the main causes of their homelessness.

The main causes of homelessness in Australia seem to be unaffordable housing, poverty and domestic violence. All of these three causes seem to be linked to high housing prices in Australia. More specifically, the lack of affordable rental housing that is plaguing the country seems to be at the core of the problem.

In 2018, a property survey discovered that only 485 rental homes out of 67,365 homes “were affordable for a single person on the Disability Support Pension.” This meant that only 0.72 percent of rental homes were affordable for someone with disabilities. Many people in Australia believe that the current state of housing was caused by the Australian government’s mismanagement of the housing market.

What distinguishes homelessness in Australia from those of other countries is how young the homeless population is. Youth between the ages of 12 and 24 made up 27,680 of the 116,427 homeless people in Australia in 2016. However, these estimates may not fully reflect the state of youth homeless in Australia since the youth who are couch surfing will put down their host’s address as their place of residence.

A 2016 research study found that there is an average cost of $15,000 to the country’s economy for every young homeless person. The study also found that an additional $15,000 per person must be spent on “health and justice costs.” The young homeless are especially vulnerable to the current housing crisis in Australia. Reports show that about 54 percent of all single people who look for aid from homelessness services and shelters were young people.

Assistance for the Homeless

The effect of Australia’s undermanaged housing market created an environment where the low-income earners couldn’t afford a home. Since many of the homeless in Australia suffer from mental illnesses, alcoholism or other physical disabilities, these homeless are further marginalized from the Australian housing market. The number of Australian youth without a stable home and shelter also paints a grim picture. However, the Australian government and the people of Australia are taking active measures to alleviate the issue. With this continuous support, many hope that homelessness in Australia will be a story of the past.