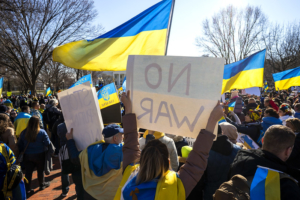 The war in Ukraine disrupted its supply chain of HIV medication and necessary health services. More than 40 health facilities that provided services for HIV treatment and prevention are now closed. What is more, it may not be safe for HIV-positive Ukrainians to leave their shelters to pick up their medications, and even if it is, pharmacies are not guaranteed to have the drugs. People fleeing also do not have adequate amounts of medication. They may have a one-month or two weeks supply, but not enough to sustain them before they have access to more medication. The people in Russian-occupied territories along with those who are unable to relocate to a safe place are currently the most vulnerable.

Antiretroviral therapy (ART) involves taking a combination of HIV medications daily. Though ARTs are not a cure for HIV, they help prevent transmission and let HIV-positive people live longer healthier lives. ART reduces a person’s viral load, the amount of HIV in a blood sample, to an undetectable level. If a person’s viral load level is undetectable, meaning that a viral load test cannot detect it, then that person cannot transmit HIV to others.

Before the war, approximately 260,000 people were living with AIDS. Of this population, only 58% had access to daily antiretroviral medications. Now, with the war resulting in reduced access to ARTs, UNAIDS reported the possibility of the “resurgence of Ukraine’s AIDS pandemic.”

How PEPFAR Has Been Providing ARTs

HIV-positive Ukrainians are now depending on international support for treatment. The United States President Emergency Plan for AIDS Relief (PEPFAR) invested $13 million in antiretroviral medications for Ukrainarinas in need. PEPFAR began in 2003 and is the largest commitment by any nation to address one disease. Its funding, which totals more than $100 billion, includes funding for the Global Fund to Fight AIDS, Tuberculosis and Malaria (Global Fund). The Global Fund also provided emergency aid for ART medication in Ukraine.

The first wave of medication from PEPFAR delivered 18 million doses of ARTs to the Public Health Center of the Ministry of Health in Ukraine and 100% Life, the “largest organization of people living with HIV in Ukraine” to distribute. This portion of life-saving treatment will cover six months of treatment for HIV-positive Ukrainians, less than that of PEPFAR’s commitment to cover one year, or 51 million doses of ART medication in Ukraine. PEPFAR flew the antiretroviral medications to Poland. From there, trucks transported the medication to medical facilities in Ukraine.

Civil society organizations are making great efforts to distribute drugs and medical supplies to vulnerable people in locations that are difficult to reach. UNAIDS put forth an initial $200,000 in emergency funds for medical supplies to be distributed in seven cities with large HIV populations: Chernihiv, Dnipro, Kharkiv, Kryvy Rih, Kyiv, Odesa and Poltava. UNAIDS has requested an additional $2.24 million to fund civil service organizations in Ukraine that are providing HIV treatment and refugees in other countries that are experiencing HIV. Civil society organizations that receive support from UNAIDS are helping to get HIV-infected individuals ARTs in the Republic of Moldova and the European Union. In addition, the World Health Organization (WHO) helped push Viiv Healthcare, a pharmaceutical company, to provide HIV medication donations to the Czech Republic, Poland and other countries in the European Union that are hosting Ukrainian refugees.

The war in Ukraine has deepened the threat of HIV deaths for positive Ukrainians. Although foreign aid has played a pivotal role in obtaining and dispersing antiretroviral medications throughout the nation and to Ukrainians abroad, there is still a high demand for ARTs in difficult locations and to continue after the one-year investment from PEPFAR concludes. Ukraine’s Public Health Center created a website with more support for HIV-positive people. The website includes information about where individuals can continue ART therapy and provides information about how to find HIV help. It also provides contacts for Ukrainian refugees with HIV. The need to get medication to HIV-positive Ukrainians is urgent, and the threat of another AIDS pandemic is not over.