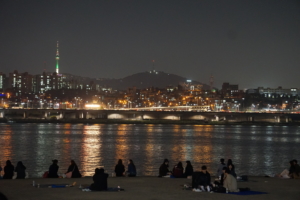 History of the Korean Economy

Poverty in South Korea has always held a place in history. Korea received liberation from the Japanese empire’s 35-year colonial rule in 1945. When the Korean War broke out in 1950, the Korean economy was largely agrarian. By the time the War concluded in 1953, an estimated 5 million people died. Among the 5 million dead, half of the casualties were civilians and the nation’s economy suffered equal devastation. By the conclusion of the Korean War in 1953, the GDP of South Korea was only $40.9 million. In comparison, South Korea’s GDP in 2015 was $1,485 trillion.

Economic Growth Igniting in the 1960s

Korean historians note the 1960s as a time of rapid economic growth in South Korea. Initially, the South Korean economy still depended largely upon foreign aid, although South Korea went through rapid industrialization under President Park Jeong Hee, an army general who seized government control in 1961. The major challenge facing President Park Jeong Hee was the lack of natural and raw resources after the war. Most of the natural resources in the Korean peninsula were in North Korea; therefore, South Korea had limited products for export. In 1964, the South Korean government hatched a plan to start the export of wigs. South Korean women began selling hair to wig factories and by 1970, wigs accounted for 9.3% of South Korea’s overall exports.

In conjunction, many Japanese textile and electronics companies began moving labor-intensive assembly plants to South Korea. As companies hired Koreans as plant employees, they gained knowledge that eventually aided in the start of Korean-owned electronics corporations. Further, the South Korean government aided in funding business conglomerates, such as Samsung and LG, by providing substantial subsidies and loans. Despite this profound economic growth, poverty in South Korea was still present from the Korean War.

The poverty-stricken Korean assembly workers made the miracle of the Han River possible. During South Korea’s rapid growth, the government’s focus on cheap exports resulted in the repression of workers’ rights. For example, competing within the international market, Korean chaebols maintained a low labor cost, resulting in underpaid workers. Additionally, it was common for manufacturing workers to work 10-hour days every day of the week. Employers and the government often ignored safety regulations and concerns too. President Park Jeong Hee outlawed unionization, making it impossible for workers to fight for rights.

In a Washington Post 1977 report, the reality of Korean workers during the 1970s was clear. William Chapman shadowed a Korean woman, Miss Lee, and found, “[that] while Korea has gleaming new factories and a growing middle class, it remains a land of miserable poverty and Dickensian wage and employment conditions for the working class.” Chapman reports abuse such as low daily wage, long working hours and lack of workers’ bargaining powers. Chapman’s work reflected terrible working conditions and their implications on poverty in South Korea.

Many of the South Korean elderly also live in poverty. Because of their high seniority-based wages and dated industry knowledge, most workers must leave their companies at around age 50. In 2017, the unemployment rate for the 55 to 64 age group was 67.5%, which is above the OECD average of 59.2%. Those who are employed usually find themselves in temporary employment with low wages. While South Korea has a national pension service, the recent rise in the elderly population is putting a strain on the system.

The history of poverty in South Korea comes from the country’s war-torn society. The rapid economic growth during the 1960s and the 1970s came at the cost of workers’ rights and exploitation, and ultimately, the poor in South Korea. In 2020, South Korea still struggles to make equitable working conditions for the elderly and non-regular workers.