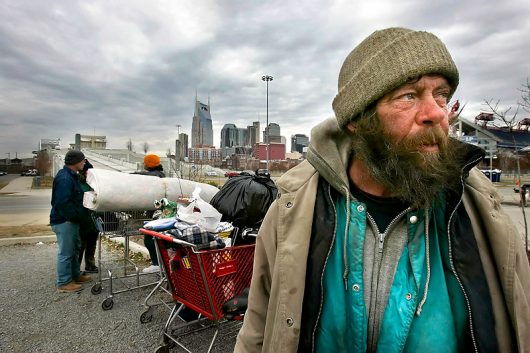 According to the U.S. Census Bureau in 2014, 47 million people — or 15% of the U.S. population — were living in poverty. Additionally, poverty in the United States is 2.3 percentage points higher than in 2007, the year before the recession hit in 2008.

Furthermore, 2014 was the fourth consecutive year that the poverty rate has remained stagnant. While conditions are not worsening, they are not improving either.

What Defines Poverty in the United States?

The federal government’s official poverty threshold for 2015 was as follows:

Click here to see additional information regarding the poverty threshold.

Who Lives in Poverty in the United States?

As of 2014, 21% of all children in the United States lived in poverty. About 15.5 million children, more than the entire population of Ecuador, lacked the required resources to ensure even a basic level of comfort and freedom from distress.

What Can We Do To End Poverty in the United States?

There are several things that can be done to help bridge the gap between the richest and poorest Americans. Here is a list of five tips to help get you started:

Be giving of yourself. Find a local Open Heart Kitchen to work in. You can also volunteer with an organization that provides tutoring or afterschool programs for children living in impoverished areas. Your compassion can help immensely.

Find an organization that helps fight poverty in the United States. Additionally, it is important to find one that expresses values and a mission that you care about. The Borgen Project may be focused on fighting poverty abroad, but the work that they do helps create jobs and stimulate the already-struggling American economy. As nonprofits, these organizations also rely heavily on donations to fund their philanthropic and humanitarian endeavors.

Congress is supposed to represent its constituents, so contacting them can make a difference. Writing a simple letter or email, or making a phone call to your representative’s office lets them know that you are a concerned citizen. If enough people contact a representative in support of a particular issue, it sends the message that it is something that he or she should fight for. Above all, representatives speak for the people who elected them, so your voice does matter.

Shopping local helps stimulate the economy in your area. When independent businesses are successful, they create jobs. Donating and volunteering are great ways to help fight poverty, and they can be very fulfilling. But providing a person with the opportunity to work and learn business skills sets that person up for future success.

5. Support and Use Public Transportation

For many people, buses and trains are a primary means of transportation. Getting to and from work and school would be impossible without these things. It is also an industry that employs over 400,000 people and generates $58 billion in revenue annually. According to publictransportation.org, every dollar invested in public transportation yields around $4 in economic returns. In addition, public transportation also creates and sustains 1.1 million each year.

In order to eradicate poverty in the United States, we need to work together. We need to invest in people, providing them with the necessary skills and resources. As a result, they can better provide for themselves and their families. Contact your congressional representatives, serve your community or buy from a local small business. These are all simple things that you can do to assist in the fight against poverty at home.