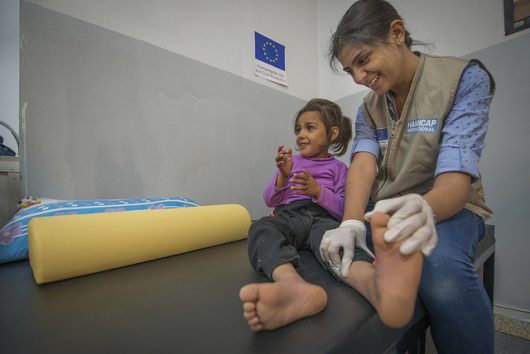 Several years ago, civil unrest in the Syrian Arab Republic – similar to other protests connected to the Arab Spring – broke out into a full-scale civil war. Millions of civilians have, in one way or another, been adversely affected by it, and the conflict shows no signs of slowing down.

However, not all of the news coming from Syria has been completely negative. Providing access to healthcare in a war zone is not always easily accomplished, but is by no means impossible. This is apparent as, earlier this month, UNICEF and the World Health Organization (WHO) have announced the successful vaccination of over 355,000 children under the age of five against polio – nearly 30,000 more children than the target goal outlined in June. The news comes particularly from Raqqa and the Deir Ez-Zor regions of the country, both of which are normally especially difficult to access.

The campaign was carried out in conflict-affected areas by over 1,000 WHO-trained volunteers in Syria and it was funded and equipped by UNICEF.

Prior to this region becoming a war zone, the immunization rate of children in Syria was approximately 80 percent, with polio maintaining zero presence at all. In fact, 95 percent of all polio cases could be traced back to Afghanistan, Pakistan or Nigeria. Since the outbreak of conflict, however, the nationwide vaccination rate has halved, as doctors, hospitals and other forms of healthcare in the war zone have focused on treating those injured in armed conflict. The WHO has also stated that since the war began, 17 children in Syria have been paralyzed by the effects of polio.

In order to continue vaccination efforts and restore the facilities of healthcare in a war zone, UNICEF and the WHO are planning to continue to work with local partners in the Raqqa and Deir Ez-Zor regions of Syria. Hopefully they will be able to keep up the momentum of combatting this deadly disease and progress in eradicating polio will continue.

Addressing Poverty in ArgentinaWhy Is Mali Poor?
Scroll to top