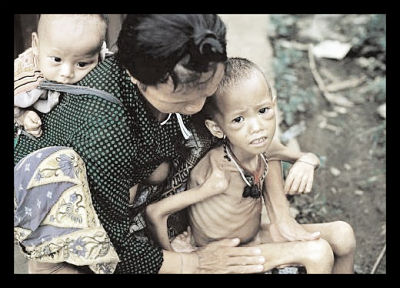 Thailand is often known as the land of beautiful beaches, burgeoning tourism, and The Hangover 2. But that’s not quite the whole picture. While Thailand has seen great developmental leaps over the past 20 years, the country still faces challenges with poverty and more recently growing inequality in Thailand.

At the surface, Thailand appears to lie in a positive, growing position. Starting in 1990, the poverty level decreased from 27 percent to 9.8 percent, in just 12 years. The number of chronically underweight children dropped to half its previous measurement in this same time period. Access to education and literacy rates continue to improve annually.

The problem lies in the fact that this growth has been concentrated in cities and urban areas, leaving the rural communities and hill tribes to suffer. Nearly one million children lack documents proving their birth registration. This means the Thai government does not recognize them as citizens, preventing them from receiving any governmental benefits and recognition of their basic human rights.

While unemployment stands at a promising 2 percent rate, child labor remains a fact of life for many, with an estimated 818,000 children aged five to fourteen generating income for their families. As Thailand’s economy continues to grow from increased international trade and as educational standards increase, this number is expected to fall.

Issues with water sanitation have continued to create health problems for 4 percent of the country, with the majority of that 4 percent consisting of rural communities without proper sanitary technology or regulations. This lack of clean water leads to malnutrition and the spread of disease through bacteria.

Human trafficking continues to stand out as significant problem for the Thai people. This underground industry leads to thousands of kidnapped people who are then forced into modern day slavery, in the form of prostitution or forced labor. The popularity of prostitution in the country also contributes to the spread of HIV and AIDS, currently afflicting more than 610,000 people.

Currently 9.8 percent of the population lives under the poverty line. This percentage is largely concentrated in the rural outskirts of the country. This demographic consists of small farmers, without access to education. In contrast, many citizens in the urban areas of Thailand have benefited from the job creation generated by the country’s growing international economy.

Geographically, the struggling sections of the country lie on the borders, with the hill tribes in the far northern and far southern regions remain left behind as the rest of Thailand has progressed over the last two decades. These isolated areas see the greatest problems with hunger, with women and children’s health in particular struggling with malnutrition and mortality rates. Without access to proper medical care, little improvement is being made and disease continues to spread. Similarly, a lack of education prevents these remote areas from growing economically.

While Thailand certainly has achieved great progress in meeting its problems with poverty, there remains much work to be accomplished. The growing disparity in both wealth and basic human rights must be addressed and the country must unify even its most distant regions in order to continue to move forward in its developmental journey.