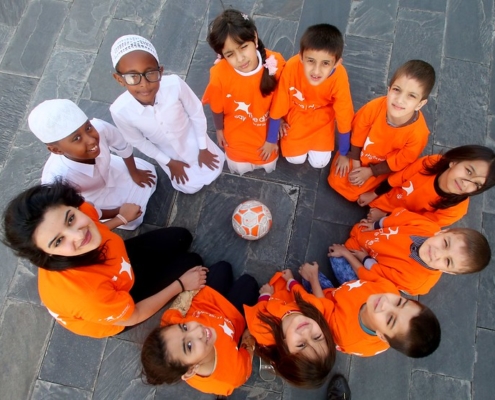 “Sport has the power to change the world. It has the power to unite in a way that little else does. It speaks to youth in a language they can understand. Sport can create hope where once there was only despair. It is more powerful than governments in breaking down racial barriers. It laughs in the face of all types of discrimination,” said South African anti-apartheid revolutionary Nelson Mandela. Soccer is the world’s most popular sport. More than 240 million people play soccer. At least 30 million girls participate in the sport. Goals for Girls helps young women across the globe score their own goals and celebrate empowerment.

Goals for Girls changes the world of young women. It started with a team of 16-year-old soccer players who opted to impact the world through soccer rather than compete at an international tournament. Now, Goals for Girls has teamed up with funding agencies, new partners and stars of the U.S. women’s national soccer team to teach and develop young women into agents of change through soccer. The organization aspires to give each young girl the tools to become a world changer.

Sports offer many psychological and physical benefits for girls and women. People who participate in sports benefit from a more positive body image, self-concept and overall well-being. In 2016, Saudi Arabia sent four women to compete in the Rio Olympics. This historical move represented a forward shift for women in Saudi Arabia. Before, they had faced discrimination and had restricted rights; they still do.

Maria Toorpakai, a Pakistani squash player, uses her sport to face and fight the Taliban. She gained their attention as she rose to fame. She moved to Canada to train, but she hopes to go back to Pakistan to bring sports to boys and girls. The U.S. women’s national soccer team is paid one-fourth of what their male counterparts are, but it is paving the way for the equal pay movement.

India hosted the first Goals for Girls program in 2014. The program tackled awareness, communication, teamwork and goal-setting. These are the four international summit pillars of Goals for Girls. The organization aimed to facilitate activities that help with issues the young girls faced on a regular basis like gender-based violence, child marriage and education inequality.

Girls are more likely to be pulled from educational opportunities. Additionally, girls who marry young tend to have lower educational levels and are perceived as an economic liability to their family. UNICEF is working with the Indian government to forgo child marriage through girls’ empowerment, which aligns with the mission of Goals for Girls.

South Africa became a country of focus after the launch of the program in 2007. In South Africa, the program centers around the aforementioned international pillars, but the activities are tailored toward issues plaguing girls in South Africa like HIV, teenage pregnancy and education inequality.

There have been strides made in recent years to combat the HIV epidemic. Despite having the largest antiretroviral treatment program globally, South Africa still has the highest prevalence of HIV in the world. Poverty, along with gender-based violence and gender inequality, perpetuates the discrepancy between gender and HIV rates. In 2016, South Africa implemented the “She Conquers” campaign to increase economic opportunities for women, prevent gender-based violence and keep girls in school.

Sports have been a platform for change for many women on a global scale. Goals for Girls is working to make that change even stronger. It is providing girls with education, teamwork building skills and important life skills. Its ultimate goal is women’s equality.