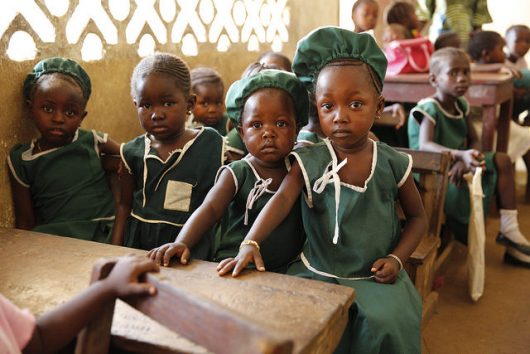 As is true in many countries around the globe, female education in Sierra Leone has lacked greatly throughout the nation’s history. Remnants of severe educational inequality still persist with males leading their female counterparts in literacy rates at all levels of education. While the country as a whole faces extreme poverty, it is females who suffer the most. In times of desperation, many young women are forced to leave school in order to work at home or find a husband. As a result, the current state of girls’ education in Sierra Leone is underemphasized and unjust, however, we may be embarking on a new era in female empowerment.

A Turning Point for Sierra Leone

The last decade has proved to be a turning point for the nation and its female population. Beginning in 2007, Sierra Leone became a member of the Global Partnership for Education. Through its commitment to the organization and the reciprocal aid received in the process, Sierra Leone was able to redesign its Education Sector Plan and offer new resources to females across the country.

This new plan not only focused on increased access to free pre-primary education (ages three to five) but also enhanced its commitment on the backend, strengthening equitable access to senior education by providing more scholarships to female students. As the country enters into more formal relationships with international groups, such as the U.K. Department for International Development, girls’ education in Sierra Leone is undergoing a remarkable transition.

In addition to government-sponsored relief, other organizations have also implemented innovative programs that increase the focus on girls’ education in Sierra Leone and create an atmosphere where such a focus is of utmost concern. UNICEF now annually supports a Girls’ Education Week which is formally run by the Education Ministry. The fact that such a program is now receiving national attention demonstrates the changing public attitude in regard to girls’ education in Sierra Leone.

Girl Child Network, a nonprofit organization that works around the globe, is currently implementing crucial outlets for girls to be protected, be treated as individuals and be able to receive quality educational materials throughout Sierra Leone. The organization offers leadership training programs, which aim to build confidence in young women and girls.

It is also currently implementing Girls Empowerment Villages that offer a place of refuge where abused girls can stay. Now protected, these girls have the ability to pursue education and receive quality information that is disseminated within the villages.

While relief and equal access programs are vital in transforming girls’ education in Sierra Leone, it is important to see the true effectiveness of this recent movement. According to the Global Partnership for Education, the gender gap between primary enrollment and primary completion rate has decreased since 2012. While the male enrollment rate has not changed dramatically, female enrollment has been on a steady increase and completion rates have skyrocketed.

As of now, improvements to girls’ education in Sierra Leone are still underway and the eventual outcome cannot yet be determined. However, the success of recent years and the amount of campaigns and groups that continue to operate on behalf of girls and their education nationwide is promising. National commitment to this movement, combined with international aid, is creating the foundation for a stable future in female education in Sierra Leone.