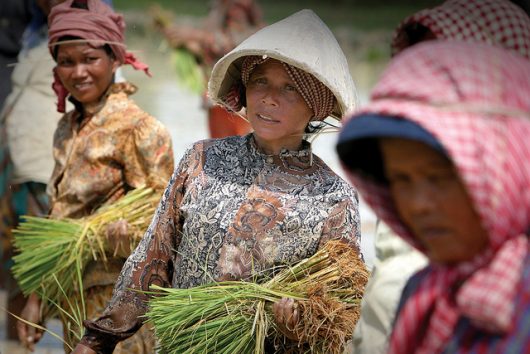 During the Vietnam War (1964-1973) over 250 million B-52 bombs were dropped on Laos. About 80 million of those bombs failed to detonate. The undetonated bombs remain a health hazard and safety risk today. While the Mines Advisory Group (MAG) has been working on clearing unexploded ordnance (UXO) since 2004, the rural farmers of Laos are living with the risk of their children and themselves being injured or killed by undetonated bombs that were dropped 50 years ago. Sustainable jewelry brand Article 22 has partnered with local artisans to erase these ghosts of war by creating UXO jewelry.

Seventeen percent of Laotians are rural rice farmers. Most of them live below the poverty line defined as having less than $1.92 a day. UXO’s are making it extremely difficult for families to climb out of poverty since the bombs were dropped in rural farming areas and farmers have to be extra careful when planting and harvesting their rice crops. Although some of the of UXO’s are marked, many are not, leaving Laotian farmers to live in a constant uncertainty. As bomb clearance expert John McFarland of MAG says: “If a bomb blows off someone’s arm, the family loses that income because they can no longer work.” Along with that uncertainty goes the fear that young children will wander into a UXO area and have a potentially fatal accident.

The constant fear that the UXO’s are causing to the peaceful life of Laotian people is unthinkable. Instead of focusing on simple things like going to work and getting their children educated, they have to worry about unidentified bombs going off. These ghosts of war are a constant reminder of a tragic past time in Laos. Article 22 founder Elizabeth Suda’s innovative approach to clear UXO land while improving farmer’s lives is inspiring hope.

Buying Back the Bombs

After seeing the spoons one Laotian man made from scrap metal of safely undetonated bombs, Suda knew that something more profitable was waiting to be made. Buying Back the Bombs is a campaign that pairs the work of local Laotian jewelry artists with Article 22, MAG and Swiss nonprofit organization Helvetas to sell UXO jewelry made from safely disarmed UXO. The goal is to provide extra income for Laotian rice farmers as well as UXO clearing and education for local communities. Spoon making inspired the idea, but Suda knew that making jewelry out of old bombs would be more profitable for the artisans locally and internationally. By selling bracelets, necklaces, and earrings made from old bomb scraps, these artisans make an extra income in addition to farming that is five times the local minimum wage. In addition, about three meters of land is cleared of UXO with every piece of UXO jewelry sold.

The combination of extra income and UXO clearing is changing the lives of Laotian people. Now, they have hope to work themselves out of poverty. The extra income has afforded some to send their children to school and through the UXO clearing and education, children are less likely to run into UXO. This peace of mind from having extra income and a safe neighborhood is giving people a chance to focus on other important things.

In addition to getting extra cash from the sale of Article 22 jewelry, 10 percent of each sale goes to a community development fund where the artisans decide what to spend the money on. So far, they have used the money for electricity in communal areas and to finance microloans to start small businesses. Buying back the bombs has allowed poverty-ridden communities to thrive. Peacebomb jewelry is a beautiful solution to something that sadly still is a destructive force in Laotians lives. Continued projects such as this will help erase the ghosts of war.