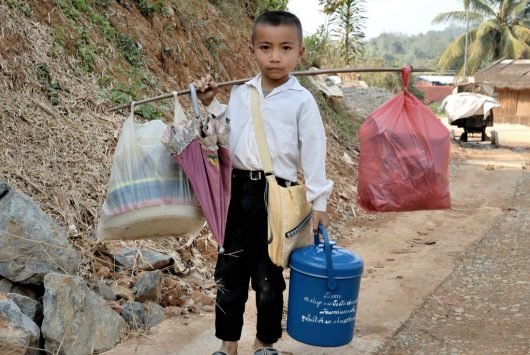 Laos is a small country populated with mountains and more than 10,000 rural villages, situated on the Asian continent. It is not hard to understand why the people of Laos have a hard time with nourishment, as many of the rural villages lie in remote areas of the country that have trouble getting access to healthy food and clean water.

Hunger in Laos is a problem for the varied communities living in the country because of the threats it poses to health. While the country has worked on improving the state of malnourishment, the Global Hunger Index reports that the country has a high percentage of hungry people.

Facets of Hunger in Laos

The high level of hunger in Laos is attributed to factors like the lack of access to food sources and properly sanitized water. In fact, around one-fifth of the population of Laos consumes less than the minimum dietary requirements set by the United Nation’s Millennium Development Goals (MDG).

The U.N. reports that malnutrition in Laos illustrates the inequality in the country, especially when one takes into account the regions and groups who demonstrate the most need.

Rural communities are common in the mountainous regions, but the areas that lack road access are typically those hit hardest with hunger in Laos. Furthermore, many of these areas report children with stunted growth and insufficient weight gain, both common results from undernourished communities.

In conjunction with the U.N.’s MDGs, Laos has halved the proportion of hungry people living in the country. However, more than 11 percent of rural households still report a lack of food sources, resulting in poor consumption habits.

There is still hope. With help from the U.N., the government is steadily moving towards the goal of decreasing the percentage of people who experience hunger in Laos. In recent years, rapid economic growth and agricultural prosperity have had great effects on the population, contributing to the notable decrease in the proportion of undernourished people.

Success has been slow but is expected to increase. With help from the U.N. and programs like the National Zero Hunger Challenge, which works to end hunger, food insecurity and malnutrition, Laos can decrease the number of hungry people in the country and ensure the population is living a healthy lifestyle.

Throughout the Years: 5 Facts About Poverty in Montserrat“Small Smurfs, Big Goals” and US Sustainable Development Goals
Scroll to top