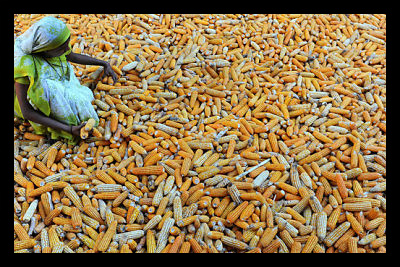 According to the World Bank, the world’s population is set to reach over 9 billion by 2050. With food security already a challenge, how will agriculture meet the food security needs of a much larger population?

According to Chris Brett, global head of sustainability at Olam International, food security success will depend on what he calls the ‘four A’s’—availability, accessibility, affordability and adequacy.

Availability, says Brett, will depend on smallholders’ access to land rights and financial support. Brett believes that policy-makers should look at ways to encourage lending, and increase the extent to which farmers legally own the lands that they cultivate.

As over 2 billion people depend on smallholder farms for their livelihoods, augmenting the smallholders’ ability to prosper could potentially go a long way to reduce poverty.

Banks, however, are unlikely to lend to farmers in disaster-prone areas. Farmers in such areas face the difficult choice between investing in safe but unprofitable crops, or riskier though potentially more lucrative alternatives.

According to a recent article by Gaby Ramm and Roland Steinmann, agriculture insurance presents a potential solution to the conundrum faced by farmers in risk-prone regions. Pilot study results suggest that insurance can indeed play a role in encouraging farmers to engage in more lucrative practices. In India, farmers with rainfall insurance displayed a tendency to gravitate toward cash crops, which—though vulnerable to rainfall deficits—produce much greater returns.

Furthermore, insurance can also indirectly allow farmers access to more credit, by encouraging lenders to lend with more frequency and confidence. This, in turn, leads to further capital investments.

Brett also notes that, while Africa’s agricultural potential is enormous, investments in infrastructure will be necessary for that potential to be fully realized. It is estimated that Africa needs $55 million in agricultural investment to guarantee self-sufficiency.